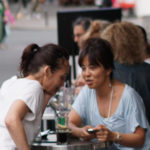 Dialog is an essential part of an effective memoir. It performs several functions in  making your story interesting and meaningful. Every memoir ought to have carefully reconstructed dialog.

Here are some reasons for including dialog in your memoir:

1. Dialog allows the reader to hear the character speak for himself or herself.

Appropriately called the Memoir Start-Up Package, this package contains much that you will need to launch yourself on the process of leaving a meaningful written memoir.

Writing a memoir can be a lengthy endeavor. Why not be good to yourself and invest in the strong foundation this package will provide?

Treat yourself or a loved one to the gift of memoir. CLICK HERE.

If your  character had some defense, for instance, of a behavior, you can include it here.

It is an opportunity to use regionalisms and particularities of speech.

You can even write in the pauses if that was typical of the person.

2. Dialog allows us to show and not tell. It permits the writer to put “tell” elements into the voice of the character rather than that of the author. It thus becomes “show.” When the author present info, however, it is “tell.”

Of course, you have to use dialog that you actually heard or have drawn from a letter or a journal. You cannot make things up just to ease your writing task.

3. Dialog imparts immediacy to the story. It has a “you are there” quality.

It’s harder to mess up short dialog than it is to mess up long dialog. Keep explanations for the narrative.

“This is my cousin Elizabeth,” she replied, “whose father once had a hardware store on the corner of Huntington and Blake and whose business won best in the state three times in a row, but who finally got sick of hardware and turned to accounting.”

“This is my cousin Elizabeth,” she replied. Elizabeth’s father once had a hardware store on the corner of Huntington and Blake. His business won best in the state three times in a row, but he finally got sick of hardware and turned to accounting.

2. Insert feeling and emotion in the dialog.

Again keep analysis or interpretation for the narrative.

“I hate you!’ he snarled. He had been putting up with his brother for a long time and now…

3. Do not replicate most dialog from real life in your story.

Next time you are in a public place, listen to dialog around you. You will easily notice how repetitive, aimless, and meaningless it often is. Much of it just fills the air! Lifestory dialog has to move your memoir along. It cannot be a filler. It cannot be used because “That’s really what we said.”

In the first example below, the dialog doesn’t move the story along. It’s simply imitative of real life. In the second, we have a glimpse of the character’s life and so htis bit of dialog moves the story along.

“What will you ladies have today?” the waitress asked Theresa and me.

“What’s the special?” I asked.

“Halibut! Oh, I had halibut at my daughter’s the other day. No, I want something else.”

“What will you ladies have today?” the waitress asked Theresa and me.

“What’s the special?” I asked.

“Halibut!” For a moment, I was taken away by a feeling that I could not describe, but then it came to me. I had ordered halibut the day Tom had taken me out to lunch to tell me he was divorcing me.

4. Skip dialog if it doesn’t add anything.

Good luck writing the dialog of your stories!