Our house at 428 Webster Street that we moved to in the fall of 1949 was a cozy little house, and it fit our family well. The boys had a bedroom in the back, and Claire slept with us in the front bedroom. Albert and I had bought a bedroom set that had a bed and two bureaus—the pieces all matched and that made me feel good after having mismatched pieces. There was a low bureau with a mirror and that one became Albert’s and the highboy was mine. After our trip to Montréal, I had shown Denis pictures of the city streets. In Montréal, the second floors are reached by a winding outside staircase. These are very distinctive (even if they must be hard to climb or descend with ice on them), and he had begun to draw houses with long winding stairs just as in the pictures. He would store these beneath Albert’s bureau. He would take them out and spread them on the floor and tell stories about them. I could be in the kitchen and I’d hear him telling a story. He always liked to tell stories. Billy was more interested in building things with blocks. 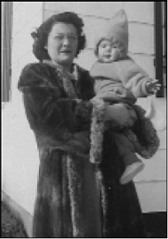 There was a small archway between the kitchen and the living room, but, because of the way the rooms were set up, you really couldn’t see from one room to the other, though it was easy to hear what was going on. In the kitchen, we had an electric refrigerator—a Philco—and an electric range. That’s how much things had changed since we lived in Syracuse with an icebox in the hallway. Now after the war, everyone had electric refrigerators.

In the living room, we had put together furniture from various family sources. I had two chairs that had belonged to my parents. I had covered these chairs with cloth slipcovers. We also had what was called a studio couch, which we had inherited from Blanche and Armand when they had moved away. It had a mattress that was part of the framing of the couch and a mattress that you could take off. The back, which was covered with cushions, was a removable spring with collapsible legs. The top mattress was then laid on this spring. With these adjustments, the couch became a double bed for when we had company. The room did not have a rug. Rugs were more expensive in those days and what we had on the floor was a linoleum square.

In those days, we did not have TV so, in the evenings when we were together—that is, the weekend, since I worked on the second shift during the weekend—Albert and I would sit in the living room after the children were in bed, and we would be listening to the radio and reading a magazine or a newspaper. Neither of us read books, but Albert liked to read magazines like Popular Mechanics and I might read a magazine about taking care of the household. There was also the Lewiston Evening Journal that arrived in the late afternoon. We did not subscribe to Le Messager. I sometimes read it when I visited my parents or when we were at Albert’s parents’ house.

Next door there was a family in which the mother was from France. She had married a Franco-American. Her little boy was named Daniel, and when he did not do what she wanted she would shout, Je suis fâchée!1 She pronounced the letter “A” differently than we did so it seemed funny to listen to her. When the boys heard her, they would sometimes repeat fâchée, fâchée in her singsong way and I had to tell them not to do that, even though she sounded funny to me, too.

In a lot of ways, those were good years.

The Summer I Was A “Slave”
Visiting My Parents’ Home Town, Thetford