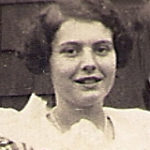 The following is an excerpt from We Were Not Spoiled by Lucille Ledoux as told to Denis Ledoux.

Eugène was born on June 11, 1933. Since my grandfather Verreault had died ten months earlier, my parents named the baby after him. They chose Bob and me to be his godparents. I was going on twelve and Robert had turned ten in February. Since godparenting called for raising a child if the parents died, this was a big responsibility which we could not possibly have fulfilled. (Since Gene was the ninth child, perhaps my parents were running out of people to ask to be godparents?)

My parents worked hard to take care of all the kids they had. I suppose it as inevitable that they were always pushing us to help them out in ways that were beyond our ages. Bob and I were especially prone to being pushed beyond our capacities.

In the summer of 1933, I started to work for the Laneuville family, who lived up the street. Like my mother, Mrs. Laneuville had a large family. However, she was not feeling well so she asked my mother if I could be spared to provide some help. This was to be my first job outside the home. I would go over early in the morning and sometimes stay until after supper. I would iron, sweep, do dishes, change babies, and hang laundry on the line. I did anything she asked me to do. For this long day, which was full without much slack time, Mrs. Laneuville paid me $4 per week. Even then, that was not much. Since they fed me, I suppose they considered that to be part of my pay. They were not unkind people, and I’m sure $4 per week was difficult for them as they were poor and Mrs. Laneuville’s illness was making it even harder for them to make ends meet.

That summer, I was somewhat of a “slave” at a time when I probably ought to have been reading more, which would have prepared me to pursue more education, but my parents didn’t cherish learning. My father had left school at nine to work in the Thetford Mines. My mother had had a bit more formal education but not much more. Since I gave the money I earned to my parents, my $4 contribution was helping them out financially—and their food bills were reduced by what I ate at the Laneuvilles. Perhaps this was more important to them than my education.

Robert too worked for the Laneuvilles. Mr. Laneuville operated a small dairy. He bought milk from local farmers and resold it to clients on a route he served regularly. Robert helped him with just about everything. Like me, he handed his pay over to our parents. In this way, we children were compensating for the cut in our father’s in salary and helping our family to survive the Depression.