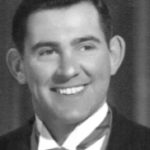 At 27, I was ready to get married but I had not found anyone yet. I sensed being married would be a good thing for me and I began to get more serious about finding a wife. One Saturday evening in the fall of 1950, I went to the Bates Hotel which was on Bates Street near Main Street. The Bates Hotel had a dance every Saturday evening. Across the room, I saw a girl who really interested me. I had dated on and off but I had never met any woman who really caught my attention. I don’t know what it was about her but I decided that I wanted to meet her.

When I crossed the room and stood by her, I told her my name and she said, “You’re the famous Bob Verreault.”

I was surprised that she knew who I was. Her name was Cécile Rodrigue. She knew me because she was a friend of my sister Gert’s. Cécile had once asked Gert about me, and Gert had warned her not to get involved with me because I worked all the time. Despite what Gert had told her, Cécile did not seem reluctant to speak to me.

We talked a little bit, and then I asked her to dance. She felt good in my arms, and, towards the end of the evening, I asked her for a date for another night. She said yes. After that, we went out regularly.

I had been dating several other girls and, during this period when I was getting to know Cécile, I still called them up. But, they didn’t measure up to Cécile. One had put on a lot of weight; another was always sweaty. One day, I was at the house of a third, and I noticed how messy the place was. I called another girl I had been interested in, but it was clear to me I wanted to know Cécile more than I wanted to know this girl—or any other girl. Slowly, I was realizing that Cécile was different.

I had set up a marker for myself that I couldn’t marry until I had at least $10,000 in assets. I was approaching that figure, and it seemed that my company was getting solid enough for me to be involved in a relationship. I had passed that test, but there was another test now that Cécile had to pass. Paul, Richard, and Roger were always playing jokes on me, and I guess I was still of that mentality. And, of course, since I liked to play jokes, I had to be sure that Cécile would be able to live with that. And she kept passing the test!

Finally, by the fall of 1951, about a year after we had started to date, I knew I wanted to marry Cécile. I got her an engagement ring, and when I asked her to marry me she said YES!”

That winter, of course, we continued to date, going out often with other couples. One thing 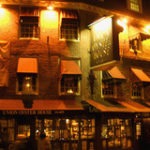 we loved to do was to go to Boston. We’d stay in a fancy hotel—the guys together in one room and the ladies in the other. One time when we were down in Boston, the three couples decided to go to the Oyster House, which is a fairly fancy restaurant. I had this idea of playing a joke, which, of course, I thought would be very funny. I had found a rubber snake and I had stuffed it in one of my pockets. We ordered oyster stew, and after it was brought to our table, I slipped the rubber snake into my bowl.

I called the waitress over. “There’s something wrong with my stew,” I complained.

“I’m so sorry,” she answered. “I can’t understand what it could be. We have served it to many of our guests today, and I’ve had no complaints.”

As she watched, I stopped stirring my stew and lifted my spoon out of the bowl. The rubber snake was on top of the spoon. The waitress screamed. Hearing this, the maitre d’ came over to see what was happening. It was apparent by then that the snake was a rubber one.

“Sir, I will have to ask you to leave. We cannot tolerate such behavior at the Oyster House.”

Cécile was clearly very upset. “That’s it! I’m through,” she said firmly as she slipped her engagement ring off and handed it to me.

With the ring in my pocket, I went outside and waited for the others to finish their meal. I wondered if I had gone too far? How could I have gotten the woman I wanted to marry so mad! I crossed the street to a small restaurant and ordered a hamburger as the others ate without me at the Oyster House. I finished before them and again waited on the sidewalk. Finally, they came out. Cécile wanted to go home to Maine. You can imagine that the drive home was a long and difficult one. Cécile would not speak to me. All the next week, I called her to get her to go out with me again but she wouldn’t. A while passed—perhaps two or three weeks that seemed to go on and on—during which we did not date, so I called a girl I had been seeing before Cécile and I asked her to go out. She paused and then she said, “What happened? Why didn’t you call me earlier?”

“Well,” I answered her, “I met someone else. We’ve been dating, but that looks like it’s not going to work out.”

“Well, I’m sorry but I’m engaged to be married in three months,” the girl answered me, her voice sounding as if she were disappointed. I had the feeling that it was me she wanted to marry instead of the other guy.

I continued to call Cécile. For me everything was a challenge—business and love. Finally, she gave in and went out with me again. We were continuing to get to know one another, and we again talked of getting married

Creative Memories and the Memoir Network
Cécile and Robert Verreault Get Married at Holy Cross Church in Lewiston, Maine