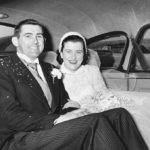 The following is an excerpt from Business Boy to Business Man, by Robert Verreault, as told to Denis Ledoux. The book is available on Amazon.com.

Cecile and I Marry

On May 3, 1952, Cécile and I were married at Holy Cross Church in Lewiston, Maine. Ours was the first of three weddings in the Verreault family that had been planned for that year. Reggie was getting married in August, and Normand in November. Our wedding reception was at the Webber Avenue Club. Although the club was only a short distance from the church, I had been offered a limousine from the Conley and Fahey Funeral Home, and Cécile and I both thought it would be fun to drive in a fancy car. Before heading for the reception, however, we were driven to the photography studio where we and our attendants posed for pictures. Then, we were driven to the hall where our guests were waiting.

When we married, I owned a Chrysler that I had bought secondhand. For our honeymoon, we drove to Florida in this Chrysler. The more we traveled south, the warmer the weather became. Some cars had air-conditioning in those days, but my car did not. By the time we got to Myrtle Beach, the air was uncomfortably hot. We decided to end our trip south and return to Maine where the spring weather was pleasant. (I have to admit that after six years of working night and day at my company, I was missing the bustle of everyday work! Perhaps Gertrude was right in what she had told Cécile: that all I thought about was work!) Heading north, we traveled up Skyline Drive which runs through the Shenandoah National Park in Virginia. It was a lovely ride, and we enjoyed ourselves.

The Guys Play a Joke On Me.

In those days, people didn’t use the phone as much as they do today. They just didn’t call home to check in so I hadn’t spoken to anyone back at the shop since I had left for my honeymoon and I was looking forward to finding out how my guys had fared. Back in Lewiston, the first thing I did was stop at the shop to see how things were. I was in for a fun surprise. The men had stuffed some coveralls—just like the ones I wore all the time—to make a figure that they hung from the peak of the machine shop roof. It was quite a sight to see myself hung in effigy! The guys wanted to see my reaction. Well, they got a good laugh at my expense.

Do you have a wedding story to share with us about your parents? Leave it below.