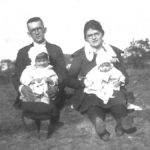 The following is an excerpt from We Were Not Spoiled, by Lucille Verreault Ledoux, as told to Denis Ledoux.

I’m not the only new person in the apartment

Not too long after I was born, my uncle Pitou Lessard (his name was really Lionel) undertook his own migration to the US from Canada, looking for work. Of course, he moved in with us. Today, people would say the apartment on Howe Street in Lewiston was too small to take in another adult, but in those days, there was almost always room to take in another brother or sister who needed a helping hand. Uncle Pitou (Pitou is an affectionate name that was also used for dogs—it means “Rover or “Pal”) just moved in with the three of us, and since he didn’t know anybody, he tagged along with my parents when they visited my father’s Dulac and Verreault relatives. In particular, they visited my father’s cousin, Charles Verreault, whom people called le gros (Big) Charles. Le gros Charles had married and had had children, among them Antoinette. On his visits to le gros Charles’ house, Uncle Pitou seemed to take special notice of Antoinette.

Charles was an only son and he had eleven sisters. Only two of them had married. The nine women who remained single lived with their parents in a one-family house that was less than a mile from the New Auburn tenement district towards Durham (Maine). They were known as les vieilles filles Verreault (the Verreault Old Maids).

My parents became friends with Émilia, one of le gros Charles’ sisters who had married Louis Lessard. (Louis was not related to my mother.) Émilia had been born in Auburn in 1893, four years after her parents had come down, meriting her American citizenship by birth. Mon Oncle Louis and Ma Tante Emilia (in those days, we called older people “Aunt” and “Uncle” when they were close to the family) had had one stillborn son and then no other children. They worked in the mills and remained close to my parents their entire lives.

Mon Oncle Pitou and Antoinette Verreault began seeing a lot of each other. One day, they announced their wedding date for Monday, February 12, 1923. During their courtship, my mother was pregnant with my brother Robert. She must have been looking forward to attending this family wedding since she was separated from most of her family events going on in Thetford Mines, but she never made it, since my brother Robert arrived the same day!

Her labor seems to have been longer with Robert than it had been with me because Dr. Morin and my father had time to play pinochle for money—nickels and dimes—while her contractions grew closer and closer together. My father—who was 24, almost 25, at the time—kept winning, and in the years to come, he often laughed as he claimed he had gotten Robert for free. (In those days, babies were delivered for five dollars and ten dollars.) Getting Robert for free, he’d repeat, is what got him and my mother going on a large family!

Perhaps Dr. Morin gave up on pinochle because he stopped playing cards and, while he was waiting for Robert to come along, he made use of the time to brush Uncle Pitou’s wedding suit before my uncle set off from our apartment alone to be married.

And so Antoinette became Ma Tante Antoinette and I had a new brother.

Note: For what it’s worth, this made three Verreault-Lessard weddings: my parents Joseph Verreault and Yvonne Lessard, my uncle Pitou Lessard and Antoinette Verreault, and Émilia Verreault and Louis Lessard.

Cécile and Robert Verreault Get Married at Holy Cross Church in Lewiston, Maine
Albert Leaves for War, and I Go Back Home