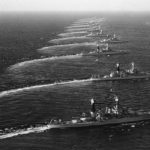 The military would never tell servicemen where we were going during World War 2, but it was a fairly easy bet that we were headed for Hawaii as a first leg to the Japanese front. The night before we were to board our ship, I had supper in San Francisco with the girlfriend of one of my friends. It would be the last time in a long while that I would have a home-cooked meal.

In the morning, my buddy and I headed out to the Mare Island Naval Shipyard where the ship we were to head out on had undergone some repairs. Like many other ships used by the Americans, this one was a foreign ship that had been more or less stranded far from its homeland and was now helping in the anti-Axis war effort. We were to board it at the yard and begin our trip from there. We reported in and then, hoisting our duffle bags onto our shoulders, took our place to board. There was a long line of men, thousands of men. The line moved slowly, the duffle bags grew heavy. It seemed that when finally we put them down to rest, the line moved again and we’d lug the bags once more. Eventually, we reached a narrow gangplank and walked up it to the ship’s deck. END_OF_DOCUMENT_TOKEN_TO_BE_REPLACED

When Should You Start Working With a Writing Coach?
How to Write Your Personal Myth into Your Memoir (Part 2) / A super easy guide to writing deeper memoir