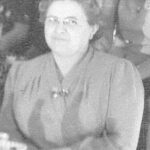 Taken from my mother’s memoir, We Were Not Spoiled, this excerpt is a memoir of relatives and the hardships they endured. (The numbers refer to footnotes below.)

Ma Tante Emilia Verrault Lessard and Mon Oncle Louis Lessard[1] both worked and, since they had no children to spend their earnings on, they had more disposable income than my parents. They would drive up from New Auburn in a little Ford that had a square back, but it had no rumble seat[2]. Since my family did not have a car, having them show up in their Ford was special to us.

Emilia was a well-dressed woman who was distinguished in how she presented herself. Louis, too, was a distinguished man. It must have been a challenge for this quiet couple who lived alone to visit my parents whose family was so noisy and full of movement. But, they were frequent visitors and, in fact, I think they enjoyed being with us children.

Ma Tante Emilia was a lot like my father. They spoke deliberately, pausing in their conversation, as if they were gathering their thoughts, before continuing. A stranger listening in might have taken them for brother and sister rather than distant cousins.

In the spring of 1933[3], a terrible fire swept through New Auburn. Friday, May 15, was a day marked with a strong wind. In mid-afternoon, a fire broke out in a garage, and the strong wind fanned the flames to nearby buildings and then to other buildings. Soon, the flames sped across a large portion of New Auburn, which was a crowded tenement district.

Ma Tante Emilia was in Lewiston when the flames first engulf New Auburn. She had been at Ste-Marie Church (I can’t remember why) and, when she walked out on the steps of the church, she saw the flames. She was dressed in “Sunday best” so she crossed the South Bridge and went home to change into her everyday clothes. Then taking a few things in her arms, she left the apartment—and her Sunday clothes—behind. (Later she would laugh about how “sensible” she had been to take her best clothes off for her everyday dress.)

I was at Holy Family Church (the first floor of the building that was later devoted entirely to the school) practicing with the choir when we heard a fire alarm. Someone came in and said there was big fire in Auburn. Later, we went down to New Auburn, to see what had happened. There were piles of rubble where there had been houses and tenement buildings. The walls of sandbags that had been set up to stop the flames were still there.

Thousands of people were homeless.[4] Ma Tante Emilia Verreault Lessard and Mon Oncle Louis’ apartment was among the many that were destroyed that day, and they lost everything. After the fire, they moved across the river to an apartment in Lewiston in the Little Canada district. Had they known what was coming in a few years they would have moved elsewhere.

In the winter of 1935-1936, there fell a lot of snow. Then we had warm weather in March, leading to a quick thaw. The rivers swelled. It was also a time, because of warm temperatures, when there was more rain than usual. Water from this rain also caused the rivers to swell. Water rushed to the streams and rivers from up north and soon all that water had made its way to the Androscoggin River. Everyday we heard that the water was rising. Soon, the river was threatening to overflow. By the 11th of the month, the river was at flood level and it spilled over into the streets near its banks. All along the Androscoggin, bridges were swept away. Some of the mills, most of which had been built next to the river in the nineteenth century to take advantage of hydropower, now were underwater—at least, their first floors.

Ma Tante Emélia was living in Little Canada. Once again, she lost everything. She said that the flood was worse than the fire. “With a fire, everything is gone, and you start over again. But with a flood, you have to deal with mud and mold and clean everything up.”

She and Uncle Louis bought a house on Blake Street in Lewiston. They took the first floor and rented the second to a tenant. It was where they lived for the rest of their lives.

DL: I hope you have enjoyed this memoir of relatives who were important to my mother and her parents.

Do not put off writing a memoir of relatives who were important to you!

[2] Wikipedia describes a rumble seat as “an upholstered exterior seat which hinges or otherwise opens out from the rear deck of a pre-World War II automobile, and seats one or more passengers.”

[4]The fire destroyed 249 buildings in just four hours. Over 2,000 people from 422 families were left homeless, and the resulting damage was valued at over $2 million in 1933 dollars. [This sort of information places the memoir of relatives in a firm context.]

Sunday School Money
Branding Yourself: Making a Public Presence for Your Work