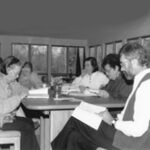 This is the third in a series of posts on the development of The Memoir Network. In the first and second of the previous posts, I wrote about the beginnings of the Turning Memories Into Memoirs workshops. In this post, I write about how and when The Memoir Network evolved

This post will interest memoir writers who wonder how The Memoir Network grew to its present status.

Its services—which are necessary both for the success of writers and for The Memoir Network—saw light incrementally over a decade.

Memoir Professionals will find the additional attraction of seeing modeled how they, too, might grow their memoir services.

If you have not read the first and the second posts, please do so as they set a context for understanding this post.

In the very first series of workshops that I offered under auspices of the Maine Humanities Council grant, after the fifth or sixth session, a woman with accented English approached me after class.

“I have a confession to make,” she said. “I have already written my memoir and I joined this workshop only to assess you. While I can use all the information and help that you are providing to revise my book, what I really want is an editor for the book that I have already written.”

It had not occurred to me that this would happen, and I was pleased it had.

This woman and I entered into an editing relationship that was to last a year. Her story was about growing up in the Ukraine under Communist rule. After all the men in her family were murdered by the Communists, and she, her mother, and her grandmother, fearing their own proximate extermination, fled to Germany in 1943.

“We hated the Communists so much that we did not believe them when they told us about the atrocities the Germans were committing. Germany was, after all, the land of Goethe, Handel, and Beethoven. We found out how very wrong we were.”

The three women landed in a concentration camp for the next two years, working as slaves for the Nazis.

While working on the 3 Worlds of Larissa had its very depressing moments, this was clearly a story of courage and hope. For me, certainly, it held out the promise that editing could be part of my endeavors.

As a former English major, I had a hard time calling my effort a business although, every once in a while, as what was to become The Memoir Network evolved, I would say to people that I had “a memoir business.”

But, whatever I called it, it was just me—and occasionally my wife.

In my press releases announcing workshops — this is before the Internet — I began to mention that I was also offering editing. In the workshops themselves, I let it be known that I was available as an editor. I did some minimal advertising, and it was through this vehicle that I got my second editing client who turned out to be a good find as I went on to work on two more of his books.

At first, my clients were coming from the workshops and from the advertising that I purchased. Then I began sending out press releases nationally. Over time, with more clients, I was able to raise my fees which was important to sustain me in this work.

By 1996, The Memoir Network evolved to have a website. This website attracted editing clients from all around the United States and occasionally from Canada.

Since my first client, I have never been without a manuscript to edit. In 2000, I created the Editing Manual and the Editor’s Start Up Package using my experience over the previous nine years of editing all sorts of books – I write “all sorts” because in that time I edited a few paranormal novels.

It was a natural for the Ukrainian woman to ask me where she should turn to, to have her book readied for publication. Since we had already published a number of books under our imprint (Soleil Press), it was easy for me to suggest that she work with us.

This was the first book that we produced for our self-publishing clients. We now normally design covers, but in this instance, the author had a cover already sketched out and she wanted us to use it. While I have always found it unattractive — and, because of this, almost reluctant to claim the book as one of ours, I am ever so grateful for her confiding the book to us. She helped launched what is now possibly hundreds or more books that we have created. We work both with people who have been our editing clients and with people who approach us with a finished manuscript.

Book production is not likely to be a service that many people would expand into as it requires special technical skills, but who knows—it may be a great fit for someone reading this. It certainly was for us as The Memoir Network evolved.

By about 1994, I was receiving letters, telephone calls, and increasingly from that new technology: the email. People were saying they wanted to teach the Turning Memories workshop. How could I make that possible?

Well, because I didn’t have anything to give them, I would suggest they buy a copy of the book Turning Memories Into Memoirs, study it, and implement its ideas, use its exercises and draw from the real-life experiences.

Then, in 1995, my wife returned from a workshop wherein she had received a class manual.

Showing me the manual, she insisted, “You can do this. You could create a manual to answer the calls and letters you’ve been receiving about how to teach a memoir workshop. You’ve been teaching memoir writing now for years. You need to put down everything you know into book form and include all the materials people could use to present workshops in their own communities.”

In the winter and spring of 1996, I spent four months compiling the gist of the Memoir Professional Package and offered it for sale that summer. I don’t have an exact number of how many I have sold, but I believe the number to be just shy of 600 packages. This has been very encouraging to me as it is easy to suppose that some 60,000 to 200,000 people have been exposed to the Turning Memories Into Memoirs workshops as a result.

Here’s another way The Memoir Network evolved. In 2000, one woman who came to one of my national workshops was a life coach. Several days into the program, she said to me, “Why aren’t you a writing coach?”

Over the next several days, she persisted in pushing me to start coaching.

“What you do here in this workshop, you can also do in a coaching session. A coach is a teacher, and you already know everything you need to know.”

I did have an MA Ed. and years of teaching at many levels.

It became obvious to me that I had already been doing what amounted to coaching with some of my previous clients and that, by framing some of my interactions as coaching, I could be giving people security. I was helping provide the supports that lead to writing: motivation, accountability, clarity about the writing life.

As I had done with editing, I began announcing that I was a writing coach.

Most people still approached me as an editor, but I saw it would be beneficial to conduct more and more coaching with them. Their manuscripts were the better for it.

It might have been possible to launch myself both as a coach and as an editor without going the workshop route, but the workshops provide me a platform for both understanding the experience of the novice writer and accessing a group of people who are likely to need more than a workshop can provide. The workshops were important in how The Memoir Network evolved.

In 2003, a woman who had signed up for several of my workshops but had never shown up and had consistently asked me to roll her tuition over to the next session called me.

“Frankly, between you and me, I’ll never show up for your workshop. I would like to ask you if you would write my uncle’s story which is really what I have wanted to write in your workshop. He was an aviator.”

She was my first ghostwriting client. Her book, Down Over Normandy, was destined only for family and friends. In the intervening years, I have ghostwritten many books, and I have enjoyed the process. Often, when a client has come to me with a manuscript with substantial revisions, the client is exhausted from the writing or feels unable to continue. In this case, I have suggested developmental editing.

As I undertake developmental editing, what I am often doing is ghostwriting. I have found that many of my clients have been quite relieved that I have taken on a task that has stymied them.

So there you have it…

This is how The Memoir Network evolved. This has been a wonderful experience for me.

Giving the Memoir Workshop Structure. Winging It Doesn’t Work
Five Memoir Writing Tips Nancy Pelosi Ought to Know Before She Pens A Memoir