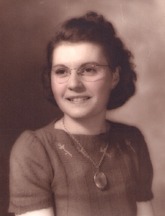 From We Were n

Not Spoiled / A Franco-American Memoir the life of Lucille Verreault Ledoux as told to Denis Ledoux. The Importance of education was not always accepted.

As I was finishing my sophomore year in June of 1937, Robert was graduating from Holy Family School. As when I graduated, my parents did nothing special to mark the occasion. Unlike me, he had never liked school and had often been made to stay after classes were over for the day either to do extra school work or to be disciplined. That summer, he got a job washing dishes at the Littleton Diner, which was on Lower Main Street near the bridge, and did a number of odd jobs. When fall rolled around, he let it be known that he did not want to go to high school.

My parents had not even had an eighth grade education and they could not see any value in spending more time in class so they did not try to change his mind. They had little sense of the importance of education. I think they accepted my time at Lewiston High School as a necessary job preparation to become a secretary, but Robert, being a guy, would eventually learn a trade and that did not call for a high school diploma. So that fall, as I headed back to my third year at LHS, Robert continued to work at the Littleton Diner and to do odd jobs.

That September, Albert Ledoux transferred to Lewiston High School from Mr. Robert’s School. He stayed at the public high school for a very short time—probably only a week, and then he quit. I think he had the same feeling that I had had of too much crowding and activity after years of being in little, quiet schools. Although his brother was studying in the seminary college, Lucien did not provide an example for Albert to continue his education and Albert, like Robert, did not see the importance of education.

His family was smaller than ours, and his father earned enough as foreman of Weave Room #5 at the Bates Mill to have kept Albert in school. His mother also worked at the Bates Mill, and her salary could have paid for Albert’s schooling. Albert was not interested in school, however, and his family did not force him to continue. Like my parents, they did not see much value in education but they were perhaps less resistant to it than my mother and father.

Afterwards Albert got a number of small jobs: washing dishes and things like that. When we were young, there was no clear way to learn how to do a job. Usually, people worked for someone else who knew how to do something and, after a while, they had learned what that person knew and they could hire themselves out. But, these were trade jobs. If you wanted to do something else—or would have been better at something else—there was not much of a way to go after it. So, Bob and Albert were washing dishes and doing work that 14 and 15 year-olds who didn’t want to go to high school could do.

I went into my third year at Lewiston High School. Miss Lamontagne, a redhead who taught Junior English, focused on literature. I didn’t like her much. Whereas the first two years had been devoted to grammar, which was all memorization, we were now studying literature, which required talking about stories and poems. This was something we had not done at all at Holy Family School. This is where the lack of reading in my home caught up with me. My reading skills were not good enough to keep up with the class. My cousin Lucille Dulac had completed the two-year Cours supérieur with the Dominican nuns and now she was at Lewiston High School for her diploma. She was better prepared than I was to be in Miss Lamontagne’s class. Although my speaking skills in English were so much better than when I started two years earlier, perhaps I still did not grasp enough English to understand literature. It was also not my nature to enjoy the sort of discussion that Miss Lamontagne had us engage in.

I soon developed a strong dislike for going to school. What was I doing there? I did not have a goal that might have kept me focused through a difficult period. Sports might have kept me there, but girls did not play sports, and even if they had, it was still unlikely that I would have felt comfortable on a team made up of “American” girls. There was nothing keeping me in school beyond the academics, and I had learned not to enjoy school work. I too had given up on the importance of education.

At home, I did a lot of housework and ironing—but no reading. Perhaps that would have made school more interesting. Perhaps it might have placed what I was studying in some sort of context. And perhaps if someone had been saying, “You will be glad later you didn’t give up,” I might have stayed. I only had a year and a half to go for my diploma.

In the beginning of 1937, I quit school in the middle of my Junior year and so I didn’t even earn my third-year credits. One morning in late January or early February, I simply didn’t return to school. Just as my parents had not tried to stop Robert, they did not try to change my mind. Perhaps they saw education as something rich people indulged in. My father was a skilled worker who had learned his trade on the job, and he saw no reason why everyone else shouldn’t also. He and my mother did not aspire to more, or to what was different, for their children.

And so, at 16, I finished my formal education and went out into the world, unprepared.

Lucille Ledoux raised six children and worked for many years in clothing stores. To the end of her life, she expressed regret at not having finished high school. All six of her children graduated from college.