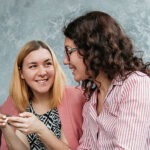 It was the summer the city burned. The weather was dry and hot, but the real tinder was a mixture of frustration and anger, white and black, promises and demands. It was not a day when I though the sparks of young love would ignite.

If I paused to consider these things, the pause was imperceptible. I stood at the edge of the pool contemplating whether to jump or dive, and finally, with one motion, I flung my body into an arc and parted the water with my outstretched hands. The water, bubbling from a nearby spring, was cold, shockingly cold. The race riots leveling Newark, killing 26 and injuring over 1,000, were 15 miles away, and if I thought about it at all, I no doubt felt protected by the leafy suburbs between there and nearly all-white West Caldwell. Certainly there were no blacks, no Asians, not even any Latinos at this private swim club nestled down a private road barely a quarter-mile from where I lived.

I floated on my back and studied my small breasts. They were safely held in place by my Speedo. My mother, who was also at the club, had been talking about taking me shopping for a bra, something so mortifying that I was certain I couldn’t bear it. I wanted to ask for the money and go by myself, but it appeared that my mother saw it as some sort of mother-daughter ritual.

Someone tapped my head. I turned to look into the sun, squinting to see who it was. It was Donna, her hair flying in all directions, silhouetted against the light, at the edge of the pool.

At every session, every writer will collaborate to support you to complete a solid first draft of your memoir. Go for quality!

“No.” Donna knelt next to me and whispered, “I got my friend.”

Donna dangled her feet in the water. “Do you think it’s going to rain?”

“I have to ask for some money.” I added, hoping my mother would gracefully step aside as my bra-buying companion.

But my mother wouldn’t give me the money.

“Christy, you are not going uptown.” My mother sounded alarmed.

I shifted my gaze to my father, his eyes closed, drink in one hand, half-reclining in his lawn chair.

“Because,” he began in a sleepy rumble, “because I have heard that carloads of Negroes”—he said the word with great emphasis—“are driving out here from Newark, just looking for a fight.”

I tried to imagine a carload of Negroes following Bloomfield Avenue all the way from its beginning in Newark to its end in West Caldwell. Surely, they would find a fight before they got out here, I thought.

“What’s the big fuss about Negroes, anyway?” I said to Donna as we walked away.

We found the checkers set on the patio and pulled two chairs close together to balance the board on our laps. I didn’t really mind not going uptown. I liked sitting close to Donna like this.

“Oh, look, there’s John,” said Donna. “Isn’t he cute?” She was always on the look out for young love.

“I guess.” I pulled her chair a bit closer. Donna didn’t seem to mind that our knees were touching. It felt good to sit here with Donna on a hot Saturday afternoon. When our knees touched, it felt as if flashes of light were racing through my body. My legs felt “trembly,” and I worried that Donna would notice. I told myself to relax, which just made all the flashes congregate in my stomach and flash even more wildly.

The piercing whistle cut through all the other noise at the swim club, several long blasts. The lifeguard was calling everyone out of the water as thunder rumbled over the tops of the trees. When it rained like this, most of the people went home. But a certain number of families always waited out the rain huddled under the patio roof. My family would stay, along with several dozen others, mostly people who had older children or who had none. I watched as the patio filled with them, dragging towels and bags and drinks along. The adults quickly established themselves at the center tables on the patio, leaving the wetter perimeter tables to their children.

“Quick, there’s John,” whispered Donna. “Let’s go sit next to him.” She was up and moving in an instant. She slipped into the seat next to John, and I squeezed in next to Donna. I had never sat this close to her, our bodies touching from our shoulders to our knees, side by side. I felt unable to speak. I was afraid that speaking would extinguish the lightning inside me—or that the lights would render my voice unintelligible. I had never been this close to young love before.

There was a commotion from the center tables where the parents were. They were all rising to their feet, some more unsteadily than the others, laughing and taking last gulps of their drinks. At first I thought they were getting ready to leave, but then I realized that they were forming some sort of long Conga line. I couldn’t tell who started the song, but the adults were all soon singing and trooping around in a circle, one hand on the shoulder in front of them.

We shall overcome some day.

I turned to Donna. “What are they doing?”

With all of their children watching, the adults continued their parade around the patio, singing the hymn in deadened voices, as if their overcoming was a great weight they had to bear. All of the kids at the side tables had fallen silent. The only sounds were the shattering of the rain on the patio roof and the low dense voices of the singers. They plodded around the circle again, repeating the three lines endlessly, until they finally, silently, returned to the tables.

“I have to go to the locker room,” said Donna.

“Me too,” I said, rising with Donna. We walked to the end of the patio and then dashed the ten yards to the locker room building. Donna headed for the toilets. I decided to hide from Donna in one of the showers. I closed the door to the stall as quietly as I could and waited.

“Christy, where are you?” Donna called. Silence. Without warning she flung open the door to the stall, startling me.

“How did you know where I was?” I asked.

“I heard you close the door,” said Donna.

We stood in the stall for a few seconds, me leaning against one of the walls, before Donna took a step toward me. She pulled me towards her and kissed me.

I had never felt anything like this, soft and tender lips on mine. My whole body hummed with the sensation. I returned the kiss, and put my arms around Donna to pull her even closer. Ten thousand beams of light raced through me with an abandon I hadn’t felt before. At last the kiss ended.

Was I entering the world of young love I had dreamed about?

“Okay,” Donna said. “As long as you’re practicing for a boy. We’re not queer or anything.” And she kissed me again.

We stood in the musty shower kissing, my body exploding with lightning flashing within and without and the thunder drawing closer. I wondered why Donna’s lips felt so remarkable on mine, and I wondered why she had to be practicing, and I wondered why I felt like crying. I felt Donna’s arms around my neck, pulling my head closer, and I wanted to stand there forever. I felt Donna’s breasts pressing against my own, and Donna’s thighs touching mine. I thought I heard the adults singing again, marching around in that lifeless circle, singing a song that the black people on television sang with so much feeling. I tried to think what my parents had to overcome. I heard the rain on the roof and I tried to count the seconds between the lightning and thunder, but they were too close together.

I had not thought that young love would bring me so much pain.

2 Responses to Lightning or When Young Love Strikes

Sample the boost you get from our FREE, downloadable, stand-alone mini-course.