While my parents were immigrants to the US, they had not really come to be immigrants. My father’s health had been affected by the tiny, deadly filaments called asbestos dust in his hometown of Thetford Mines, Québec. Thetford was an important mining town—that’s how it got the “Mines” in its name—and beneath its streets were many tunnels into which men went down night and day to bring the asbestos filaments up to the ground surface. This process produced a lot of slag, and that slag was piled high outside the mines. Almost anywhere you were in town, on the main street rue Notre-Dame with its stores and churches or in the side streets where the miners lived, you could see mountains of refuse. These piles were gray and they had no vegetation, Behind them and all around were the rolling hills among which Thetford had been built. These were green and soft because they were covered with trees.

The air the people in Thetford breathed was always filled with asbestos dust. Sometimes you had a sense of it and other times not, but you knew it was there. You knew because it came to rest on the streets and the houses of Thetford and covered them with a layer of dust. But the dust did not just stay outside. It entered the homes of the people and settled, white and thick, on bureau tops and tables and floors. My mother told me how, even though housewives were always dusting to keep their rooms clean, they were never successful for more than a few hours. Soon the dust settled white and thick on the surfaces. 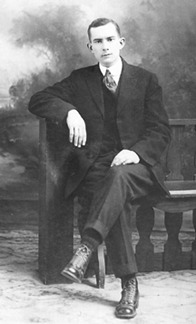 But, bureau tops and tables were the least of the problem. The dust was like a germ that entered into people’s lungs and began to cover vital tissues. There was no way to dust these tissues, no cloth to wipe away the dust. The filaments accumulated and irritated the lungs. People coughed and still they could not clear the dust from their systems. These infected lungs began to bleed and eventually many people died. In those days, there were no government regulations to protect the workers, and so the workers suffered.

My father was a strong, young man, but by the time he was 18 or 19, he began coughing and wheezing. When he was in his early 20s, a doctor advised him—as I’m sure he was warning a lot of people—that if my father wanted to live to see his children and grandchildren, he would have to leave Thetford Mines.

Where to go when you had to leave the only home you had known?

My grandmother, Zélire Dulac Verreault, had a brother, also named Joseph, who lived in Lewiston, Maine[1]. This Uncle Joseph had a home and a family in Maine and so he could take my father in. I believe my father was only intending to spend enough time to regain his health and then return to Thetford. But, of course that’s not what happened.

It must have been hard to leave Thetford because, in addition to leaving his parents and younger siblings, my father was distancing himself from his girl friend—the woman who would become my mother, Yvonne Lessard. They had, I seem to remember, an understanding that they would get married. So, going away from Thetford must have been hard, but his health required that he leave that mining town and Lewiston was perhaps a better place for him to end up in than any other. In 1919, when he was 21, my father came down to the US—les États—for a time of rest away from the dust and the coughing.

At the time, most Canadian immigrants worked in the mills, but Joseph Dulac and four of his five sons [2] had started a plumbing business, Dulac Plumbing and Heating. While my father was in the Dulac household recuperating, his uncle Joseph offered to hire him. My father was not a plumber but he was willing to learn. Over the next months and years, without intending to, my father learned a trade which, as it turned out, he had a lot of talent for. In time, his coughing and wheezing became less and less and came to a stop. By that time, Lewiston which had been only a place to get away to became a place to stay. That winter of 1919-1920, he wrote postcards to Yvonne and shared his life in Lewiston. He was not comfortable with writing, but he managed to let her know bits of his life. 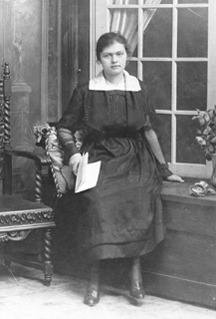 My mother worked as a waitress in the restaurant of the Hotel Lessard on rue Notre–Dame. The hotel, just across the street from the parish church of St-Alphonse was a convenient stopping spot for salesmen and buyers who were calling on officials of the mines[3]. In addition. the hotel was also convenient for engineers and representatives from the companies’ headquarters. Since business spoke English in Canada, my mother had learned enough English to serve the commercial diners. Salt, pepper, well-done, water! As long as no one engaged her in a conversation, she was fine since neither then nor after she came down to Lewiston did she become fluent in English.

I’m not sure how or when my parents decided to set a date to get married—whether it was in person (did my father go back up to visit?) or through writing, but my parents settled on Monday August 2, 1920. It was then, in the church of St. Alphonse[4], the parish church they had attended, on the rue Notre-Dame that they exchanged vows.

[1] DL: For generations, French–speaking Canadians had been forced by economic neglect of the province and political straight-jacketing to migrate elsewhere—often the US in search of income. Perhaps that was why Joseph Dulac migrated. In my grandfather’s case, the migration was purely for health reasons.

[3] Among the mines were the Johnson, the Smith and the Robertson. They were British-owned.

4 Responses to The Story of Why My Parents Came Down