DL—This is an excerpt from A Sugary Frosting, the memoir of Martha Blowen, my lifemate and business partner who died in 2008.

When you are both a story teller and a story keeper, in thirty-one years of co-habiting with someone who is very verbal, you get to learn many of her stories. A number of them you have heard not only because they are told directly to you as you went about your day—perhaps driving into town—or as you sat in the morning sipping your coffee but also because she told them to others in your presence. Often, details are added in this retelling or an emphasis changes for the benefit of the new auditor—and unexpectedly you understand a new angle to the story.

Martha wrote a number of her stories—always in segments. She intended to write a memoir but her life was cut short by breast cancer before she could realize this goal.

Wanting to finish her memoir, I inserted her compositions, chronologically one after the other, into a manuscript and soon realized that there were explanatory details missing—details that I knew not only to be true but necessary to create a memoir. Soon enough, I found myself contributing her words that lived within me into the narrative. These words soon added up not only to details but to whole stories I recalled. Soon, more of the stories originated with me than from her composition.

Can you tell where one author lets off and the other begins?

My entrance into this world could have been better executed.

I came weeks premature—weighing in at 4 lbs., 9 oz.—on May 30, 1952, at 12:07 AM. Instead of being cradled in my mother’s arms, nursing, sleeping in her warmth, as all baby mammals instinctively do, I spent my first nine days in an incubator. I must have been under harsh lights and I must have longed for my mother to touch me, to take me in her arms and to rock me—“hush little baby don’t you cry”—when I whimpered.

I must have wondered what this world I had come into could possibly promise me if this was how I was being welcomed.

With two children waiting for her, Emily had turned 9 in April and John Mark would turn 5 in July—my mother went home some time in those nine days without me. With my own children, I often felt emotional and psychic links to them. They were in the next room perhaps, and I could feel them sleeping. Did my mother feel that link to the baby girl she had left behind at Worcester General Hospital? I wonder because my mother was not an intuitive person. People say women are intuitive, but my mother was not. Her “take” on things was often premised by what she believed others wanted her “take” to be. That is, my mother was insecure and what others thought and felt were somehow more important to her than how she herself thought or felt. She was not a vain or ambitious person so this concern was not predicated on her sustaining an image. It was rather a need to be approved of as if her identity could not be secure without others approving of it. And so, who she was seemed to shift.

I was born in Worcester only because my family had only recently moved there. We had no relatives or friends waiting for us. What we had was a church—the Hadwen Park Congregational Church had called my father to be their pastor. We had been in the parsonage which was adjacent to the church only a short time when my mother went into labor prematurely. I was not supposed to be born until late June or early July.

My father was the first in his family to go to college and he had financed his education entirely on his own—having worked for five years after high school first in a rug mill and later in a shoe store to save the money to go to Bates College in Lewiston, Maine. Bates College had been founded as a Baptist school and was known in the 1930s for producing ministers, school teachers, and social workers. Once at Bates, he had worked at a job or two to finance his education, and because of the demands on his time that part time jobs required, he had had to commit five years to completing his course load.

He and my mother had met at Bates in Greek class in the first weeks of their first year. My mother was also the first in her family to go to college, and after her graduation with a BA in 1940, she had worked in Lewiston, Maine, as a social worker until my father graduated in 1941. He had then gone on to the Hartford Seminary in Connecticut, and it was decided that my mother would live with her parents in Portsmouth, NH. It was 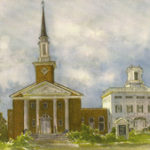 at the end of his first year, on June 1, 1942, that he and my mother married at the Middle Street Baptist Church on Haymarket Square in Portsmouth.

My mother would have wanted to be a minister, and in later years, often preached and conducted services. My father had at least one female seminary classmate (I knew her in later years) so there was some modeling available for my mother to pursue her dream. However, the wife of the Reverend Curtis at the Middle Street Baptist Church inculcated in my mother that being a minister’s wife was a higher goal for a woman than being a minister herself. True to her nature, my mother complied to Mrs. Curtis’s ambition for her.

In 1952, the year I was born, my father had been in the ministry seven years. I believe he really enjoyed his calling. As did teaching and social work for other working-class young people, the ministry provided my father an access to a professional life.

After having served small, basically working class churches in Norway and Millinocket, Maine, coming to the Hadwen Park Congregational Church, must have seemed a step up—a promotion of sorts. The congregation would have been more mixed socially and educationally than that of his previous churches.

In this seemingly placid world, not everything was well.

We Were Not Spoiled: A Memoir for the Family and for the World
My Mother Chooses Between Me and My Grandparents

2 Responses to Coming Into This World