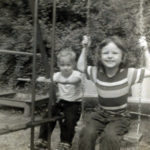 DL— This is an excerpt from A Sugary Frosting, memoir of Martha Blowen, my lifemate and business partner who died in 2008 of metastatic intraductal breast cancer.

The previous posts covered Martha’s life in Worcester where she was born.

While I believe my father did well as minister in Hadwin Park, he was by nature a small-town minister. Coming from the working class, he was familiar  and comfortable with working men and women. Or, I might say, he was comfortable being the educated man among uneducated people. His talent was working in a small, self-contained communities. Worcester is the second largest city in Massachusetts, and after a few years, he began looking for a small church in a small town.

In the spring of 1957, he was called to serve a church in Athol, Massachusetts. Athol was a mill town in north central part of the state not far from New Hampshire. It was the sort of community that was tailor-made for my parents—working-class, largely Anglo (at least historically), small enough to cut a figure in. In a community such as Athol, my parents could do what they did best—rally people around “feeling good.”

The church was in an interim time between owning parsonages—having sold the old parsonage and not yet having found a new one. Since we were three children, a stipulation of the move was that the church would rent a house and not an apartment. My parents had been living in an apartment in Norway, Maine, when Emily was born. As my mother remembered it, it had been difficult to maintain the life of a family in a small space that also served as a parsonage which the church community expected to have access to. As a result, in Norway, my father had opted to use his church office more frequently than he did elsewhere, but people might still show up unannounced at the apartment—also known as “the parsonage”—where there might be Emily screaming and a sink full of dishes. My father would then lead the church member from the apartment to the church office.

When my parents were negotiating housing for the new pastor, they insisted on not entering this situation in Athol.

The church found a farmhouse on the western outskirts of town. Overlooking the Miller’s River and Route 2A, it stood alone on what was almost a promontory. In the winter, when there were no leaves on the maples and oaks that lined the bluff rising over the state route, you could see downtown Athol and the neighborhoods to the east.

The house had been built in the latter part of the nineteenth century and there was a large barn in back of it, but the barn was not connected to the house as are so many barns in New England. By 1957, the property was showing its age. Since it was being rented and the church had no interest in owning it, there would be no repairs or updates.

Even years later, my family—certainly this was true of me—always referred to this temporary parsonage as “the house on the hill.” The house was set on nine acres of fields and pinewoods above a cliff we called The Ledges.

Behind the house were three towering pines. There was always the smell of pines when you walked around the grounds at the house on the hill and the sound of the wind in those trees. The trunks of the three pines had been trimmed so they rose high before there were any limbs. A swing hung from a cable between two of these trees, and between one of the two and a third, a rope that had huge knots lured children to ride it. Because of the cable, the swing had a bounce that felt especially unstable when a little girl who was afraid of heights went high.

In front of the house, the grass swept down to The Ledges and to the towering maples and oaks. There, a protective iron fence along the edge of the lawn stopped children from falling and a railing bordered a path down the face of the cliff to the road below. On the slope, there were low-lying blueberry bushes. Below was Route 2A and a florist shop.

Behind the house was the barn that was off limits to us. It had not been rented with the house. This exclusion set a tone—exciting, daring—that challenges us to explore this mysterious space that seemed full of treasures that lured John Mark and me in—much to my mother’s dismay. Old barns in the fifties, still had wagon wheels with wood spokes and large hay carts that loomed over a five-year-old girl, and if you were lucky, a Victorian passenger carriage with leather seats. Someplace in the corner you might find a foot-powered sewing machine and perhaps a washtub with a hand wringer.

The house on the hill became a little world of its own. Deep in the woods, at least it seemed deep to me at the time, were a mica deposit John Mark referred to as the mica mine and a clearing where John Mark and I once found the leg of a deer—a finding that was thrilling as it conjured a saga of wolves and danger so close to our house. I usually didn’t venture out on my own, but one day when I did, I walked out to the clearing to find my mother, lying on the grass. It was the middle of the day, and she was basking in the sun. This enjoyment of leisure was uncharacteristic of her. She was always involved in something. I don’t remember what we said to each other or whether I joined her—my child’s chatter and squirming most likely destroying the experience for her. From my adult perspective, I wish she had permitted herself more of these breaks from her routine.

Martha Blowen, Denis Ledoux’s lifemate and business partner, died in 2008 of metastatic intraductal breast cancer.
View all posts by Martha Blowen →
The Irreplaceable Memoir
Raising My Family Around the World ~ The Adventures of a CIA Wife and Mom