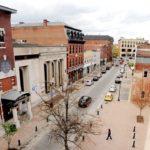 The following is an excerpt of a memoir of my high school years. This is the opening paragraphs of the introduction to the book—the first text you would read.

In the summer of 1960 when I was thirteen, my mother drove me into Lewiston to Vincent & Leblanc’s on Lisbon Street at Ash Street. There, in a shopping spree that was unprecedented, she bought me more new clothes than I’d ever had at any one time. Shirts, pants, underwear, socks, even handkerchiefs. The seminary’s list of clothes I was to bring had been very precise—three of these and two of those and I wasn’t to forget to bring a raincoat—and it seemed I was getting everything that day.

The new clothing piled up on the counter. My mother must have tabulated the expense in her mind, rounding the figures to see what this purchase was adding up to (trois et cinq font huit) and assuring herself that, of course, it made sense that I would need more clothing than the others. I had to have enough to provide for the time my laundry would be mailed home from the seminary for her to wash and then be mailed back.

I was not unaware that my parents had three other children who would be in school that fall, needing new clothes, too. My brother, Bill, was a year ahead of me in high school at St. Dom’s in Lewiston and my two sisters, Claire and Rachel, were behind me at St. Bernadette’s, the parochial school from which I had graduated in June. My father worked for an hourly wage that, my parents often complained, never seemed to be enough, and yet—and yet the growing stack of clothes, all for me, made it real at last that I was going away as I had wanted to. For that reason, I was thrilled and somehow, I managed to believe, in spite of this seeming extravagance, that my parents would manage.

They had always managed.

Each piece of clothing I was to take would need a tag to identify that it was number 134’s. 134, we had been told, was to be sewn or written on everything I would bring with me—134 on my refectory napkin, 134 on the towels in the dormitory, 134 on my hockey stick. Even today, 134, among all the possible numbers, seems more mine than any other.

My family lived in the country, and I was, in spite of having a brother and two sisters, a boy who spent his days apart. I did not understand then that our different ways of being in the world, our preferred ways of carrying ourselves through our days, interposed itself between us, and served as a wall that separated us. Often, especially with my brother, I felt solitary, wondering why we were not friends, wishing we could cross the barrier between us.

That summer before Bucksport, I must, as was my habit, have taken long rides on my red Columbia bicycle, pedaling far into the countryside between fields and the ever-encroaching woods. Even then in 1960, birch, poplar, and pine were gaining on the pastures. As the old farm life was abandoned, there were fewer and fewer reasons to keep the fields open. I often recreated in my mind what the place must have looked like 100 years earlier when there were large fields full of grazing cattle and sheep. In those days, I knew, of course, there were no French people on these farmlands, but in my pretending there were.

Bicycling up the Lisbon Ridge (towards Sabattus), the hill making me stand up to push the pedal down hard, I would stop and look towards Mt. Washington, 120 miles away in New Hampshire. In spite of my longing to leave for the séminaire, I felt ripples of doubt and loneliness around me and, as the day of my leaving approached, they seemed to grow into huge waves of fear.

My world was about to change. Everyday, a new item of clothing marked with the 134 my mémère Verreault had stitched on found its way into the trunk in the corner of my room. The accumulation seemed to make definite my impending departure. Soon, I would go away from my family. In a real way that I could not know then, although I would return at Christmas and in the summer, I would never be at home in my family again.

2 Responses to Preparing to Leave Home