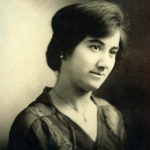 I am pleased to introduce you to guest blogger Marguerite Roy’s notes on the composition of her book, Aurore: My Franco-American Mother. Having just finished my own mother’s memoir, We Were Not Spoiled, I was keen to read about Maggie’s experience of working with family material. Maggie, by the way, did a stint in my Turning Memories Into Memoirs lifewriting workshops back in the 1990s.

An Extraordinary Woman in an Ordinary World

It was inevitable that I should write Aurore: My Franco-American Mother. From early childhood, I enjoyed my mother’s stories, visualizing the scenes as she talked about her family and the past. During my teen years, I thought my mother talked too much, repeating the same stories over and over again. Whenever she was on the phone, I would stop whatever I was doing so I could listen to her side of the conversation. And when, at thirteen or fourteen, I saw the movie, I Remember Mama, I started thinking about my own mother’s life as a movie—or a novel.

My mother was the youngest of nine children of French-Canadian parents who immigrated to Lewiston, Maine, in the 1890s. Her mother died when she was two and this loss of her mother affected her throughout her life. I wanted to tell her story and also to provide a glimpse into the lives of those families who came to work, as her family did, in the New England textile mills at the end of the nineteenth century.

I didn’t see myself as the narrator of my mother’s life though, until, as an adult, I tried to write short stories incorporating her experiences. My problem was that I recorded my mother’s anecdotes as I remembered them rather than including all elements necessary for short fiction. It became obvious that I should stay with memoir.

Only after I made that decision did I realize what an invaluable gift my mother had left my siblings and me.  While other memoir writers complained, “I don’t know anything about my mother’s/father’s family,” or, “My mother/father never talked about the past,” I had more material than I could use. Still, I just wished I had paid closer attention to details when my mother talked. I wished I had asked more questions.

While I was writing, I pestered my brothers and sisters—especially the older ones—about events they experienced but that I had only heard about. I visited neighborhoods where my mother had lived. I did research about schools she had attended and about activities and organizations in which she had participated.

Besides a wealth of stories, my mother left pictures, school mementos, letters, and other souvenirs that helped in recalling her life. Photos put a face to uncles I never knew. School dictations and compositions offered an insight into her teachers’ emphasis on religion and morality and into my mother’s sensitive soul. Correspondence from teachers and school classmates indicated that she nurtured old friendships even through the busy years of raising her large family.

Most helpful to me were the contents of a cardboard box found after I had all but finished my book. My siblings and I thought we knew everything about our mother, but among other memorabilia, in this box were poems that surprised us. Written in seventh and eighth grades, the themes of the poems were familiar to us—longing for a mother, love of family, love of God. We had found those poems in other school work. What surprised us was the depth of the work. And the length! Up to twelve verses in one poem.

Reading those, I sensed not only the depth of the love she had to give, but what aspirations she must have had as a young girl. Did she aspire to become a writer? A poet? As a young mother, she had attempted to write poetry. My older sisters remembered that she had written a poem about snow, and one about the Plains of Abraham (the battlefield outside of Quebec City that marked the turning point in favor of the English during what the French Canadians call the War of the Conquest and which Americans call the French and Indian War). They recalled that my father had laughed about her efforts. Without the time or encouragement to continue, her creative interests had been repressed. And she had dedicated her energies to her children.

Throughout the nearly twenty years that I worked on  Aurore: My Franco-American Mother, when people would ask if my mother had done anything unusual, anything special, I would answer, “No. She was just an ordinary housewife and mother.” But the more I wrote about her, the more I realized that she was an extraordinary woman in an ordinary world.

Marguerite Roy was born in Lewiston, Maine, where she lived most of her life. Her stories and articles have appeared in Down East, Discover Maine, The Family Digest, and Out of the Cradle magazines. She is enjoying her retirement in Auburn, Maine, and Sun City Center, Florida. Her book is available at: Aurore: My Franco-American Mother
View all posts by Marguerite Roy →

Albert Leaves for War, and I Go Back Home
Writing the right memoir