“Is it possible to support myself in the creative life?” I wanted to know.

One day on 1988, I stood in front of a door, on the other side of which was a group of Foster Grandparents. I had in hand a copy of my book of autobiographical short stories, What Became of Them and Other Stories from Franco-America, which my wife Martha Blowen and I had published through my brand-new imprint, Soleil Press. Soleil means sun in French and Martha who was a paper maker called her studio Moon Papers. So Soleil Press and Moon Papers seemed to us a great combo for a couple (hovering on both sides of 40) who were seeking to live a creative life.

My research had shown that the average collection of short stories published by a new York publisher sold 2,000 copies. At a 10% royalty, the numbers didn’t add up for the writer (me!) who was trying to make writing pay for itself. (I wanted my life to focus around writing not teaching high school.) Plus, what New York publisher knew about the Franco-American community in New England? (Well, Robert Giroux of Farrar, Strauss and Giroux who came from my community–but that was only one.) Figuring that I could 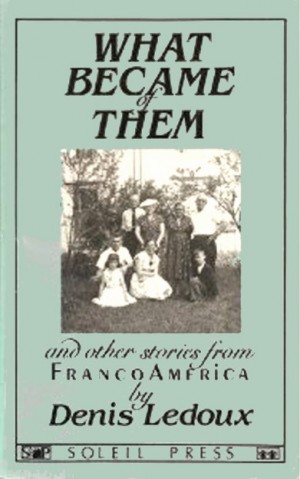 do well to promote my own book and beat the 2,000-copy figure of the NY-published collections, I decided to launch my self as an independent publisher and collect 100% of the sales. We designed a cover (which today seems unsophisticated) and found a printer. While I thought of myself as a literary writer, I knew that sales of the book would not be based on literary book reviews but on cultural identification by the book buyer. So…

I begin to support myself in the creative life.

I created a publicity schedule and began sending press releases out to announce the book. The releases emphasized the cultural aspects of the collection.  I also sent introductory letters to directors of libraries, social agencies, cultural museums, etc. One of the very first offers I received was from the Maine Foster Grandparent coordinator. She was calling from Augusta, the state capital, where she had an office, but she was going chair a Foster Grandparent meeting in Brunswick and would I want to speak to her foster grandparents about my book. “There are a lot of Francos in the group,” Mary had informed me.

But, then, in the days leading to the meeting, I began to doubt the wisdom of my acceptance. Was the group large enough to be worth my while? Would they be book buyers? Ought I to have stayed at home to write? The doubts piled up and finally coalesced into a hard resignation. I had said I  would go and go I would, but…

As I stood in front of the door, I was still thinking, “I am wasting my time. I am never going to sell any books to this group.” But I had promised to come and I resolved to give them a great program.

“Here goes!” I thought by way of reassuring myself. Slowly…

I opened the door…

To my future. Even if I didn’t know it at the time, that afternoon, I began what was to be my life’s work helping people to write personal and family stories.

There might have been thirty men and women, sitting at long tables, and they listened carefully. I felt them emotionally with me and, as I read, I could feel them thinking, as they nodded their heads, smiling, “These are people just like us!” They seemed to recognize the child climbing the apple tree at the edge of the meadow or to see, once again, their own parents in the tired men and women trudging through the tenement district—whether in Biddeford, Lewiston, or Brunswick—as they made their way from the textile mill.

After I read my stories that day, I said, “These are stories about my people. Tell me your stories.” My listeners began to tell me their stories and the  stories of their people. It was uncanny how much they wanted to tell me stories. And…

I listened. (Little did I know that I would continue to listen and, 25 years plus later, I am still listening.)

More speaking on the way

A couple of weeks after that first presentation, Mary called again to ask me to speak to another of her groups—this one in Augusta, closer to her office but farther from mine. Again, I said yes and wrote a press release to announce my program and thought more confidently this time, “It’s all part of the outreach.”

That second presentation, there was another outpouring of stories after I read from my autobiographical stories in What Became of Them. The process of priming the pump of memory was at work again.

A few weeks later, Mary called again to asked me to come to a third group—this one in Waterville. I said, “Let’s write a grant to present lifewriting workshops.” I was thinking only of writing lifestories then—not yet about books of memoir.

I expand how I support myself in the creative life.

After the Waterville program, for which I also sent out a press release, Mary and I wrote a successful grant for the Maine Humanities Council and then, the following year, we wrote a second successful one—this one twice the size of the first. I didn’t know at the time, but I was starting a business that I would call Soleil Lifestory Network. I thought I was only subsidizing a salary to pay me for workshops. Dorothy Schwartz who was director of the Maine Humanities Council at the time would tell me over the years as we met at conferences, “To my knowledge, a Humanities Council has never participated in business start-up other than yours!”

The grants kept me going for two years and then the money ran out.  By then, I had a track record and a little following. I decided to continue on my own.

Was it possible to earn an income, to support myself in the creative life, as a writer without a publisher behind me?”

I knew about publicity and outreach and I was beginning to know about book publishing, but I knew nothing about running a business. But I learned—sometimes quickly when I was dealing with material that was in keeping with my talents; more often, slowly as I was working to acquire skills that were alien to my natural bent.

Learn more about how to “support myself in the creative life.”

In the posts that will follow irregularly in the weeks to come, I will share this journey with you of learning how to support myself as a writer. In effect, what I was doing was creating a business of writing and teaching, but don’t be intimidated by the concept of “business.” As Paul Hawkens states in his 1980s’ book, Growing a Business, there is no one business type that the rest of us have to conform to. There are many sorts of businesses people with many sorts of aspirations and goals for their businesses. If you are going to publish your memoir our novel independently, you would do well to gently think of yourself a being a micro-business person and applying some “best practices.”

You can do it.

I hope this blog post has been helpful to you to write a better memoir. It is a brief—and, I believe, high quality—assist in a facet of your writing, but there is much better I and my team can provide you. The best ways always come down to a Memoir Network professional coaching and editing your memoir. As your coach or editor, we don't give you just theory as in this blog post (beneficial to you by the way). You and your Memoir Network professional plunge deep into your story and develop it so it "comes alive" for your readers. To explore this option in a free consult, email me at [email protected] for an appointment. Want to try a launcher, do-it-yourself option? Try Write Your First Memoir Draft Program. Over the coming weeks, you will learn to write better, deeper memoir and to write more quickly and with more satisfaction. Enroll today. Another option is my classic book Turning Memories Into Memoirs / A Handbook for Writing Lifestories and my many other memoir-writing books. Join our FREE My Memoir Education membership. It's easy to register, and you'll receive tons of free materials.
View all posts by Denis Ledoux →