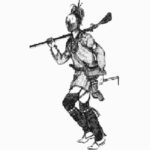 Note from the Editor:

On Wednesday of last week, I posted a blog article on the LaChine Massacre of 1689. The post was drawn from my work in progress Here to Stay, a history of my 17th-century Canadian ancestors. The post was intended to be a piece of history – and in no way a derogatory comment on the Iroquois. Both sides had their share of cruelty and savagery.

While the Iroquois attack was brutal and devastating, I have written the same about my ancestors’ attacks on the English in New England: Deerfield, Massachusetts, and Portland, Maine.  These are just two sites that were savagely attacked by the French and their Algonquin allies.

It has recently been brought to my attention that my article was reprinted from our own blog, without my permission, to a race-baiting site.

I did not give them permission to use the post to attack Native Peoples and have requested that it be taken down. I do not endorse nor condone the racist tone of the site. And do not give permission to any race-based site to reprint our articles.

The LaChine Massacre of 1689 was another unfortunate incident in what can easily be labeled as a trade war between the Iroquois and the French. The French had disrupted the Iroquois trade patterns with superior French goods that was attracting the beaver fur trade away from the Iroquois.

Obviously, the French Iroquois conflict was more complicated than this—for instance, it involved the alliances the French made with the Hurons, traditional enemies of the Iroquois—but the trade war was a major factor in the antagonism.

Thank you for your support in reading The Memoir Network blog and stay in the memoir conversation with us.

DL: The Lachine Massacre happened 330 years ago today—August 5, 2019. This account of the tragedy is excerpted from Here To Stay, a 250-page as-yet- unpublished account of my 17th century Canadian ancestors, is the second most visited post on thememoirnetwork.com site. Who would have guessed? I am re-posting it for those of you who have an historical bent of mind or who might wonder how does a memoir writer write about the distant past. In this post, I refer to my francophone ancestors as Canadiens to distinguish them as a distinct group from anglophone Canadians who arrived with the Conquest in 1760.

In the evening of August 4, 1689, the night of before the Lachine massacre, a violent rainstorm hovered above the Saint Lawrence and the Island of Montréal. Lightning flashed repeatedly across the sky and deafening thunder resounded above the seventy-seven houses of the community of Lachine. As the Canadiens slept in their isolated farms, fifteen hundred Iroquois stepped ashore, undetected by the sentries who had sought shelter against the fierce storm. Hidden by the night, warriors fanned out in small bands and readied themselves to attack isolated farmhouses. END_OF_DOCUMENT_TOKEN_TO_BE_REPLACED

A Memoir Coach or A Memoir Editor Gets You A Finished Memoir
The Best Memoir Writing Coach: How to Choose the Right One

One Response to Franco-American History and The Lachine Massacre