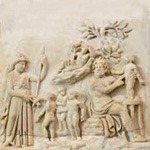 Your family myths may be stories your people choose to tell about themselves regardless of what really happened.

Myths are stories we tell about how the world seems to us to be organized. Most of us are familiar with the religious myths Greeks and Romans told as they sought to explain their world. These have survived as labels for archetypes and psychological energies—and for naming running shoes and submarines.

The myths we tell are so powerful that we see them as true while we often call the myths others tell made-up stories. Chances are, if you are an adherent to a religious faith, whether Christian Jewish, Muslim, Hindu, etc., you see the teachings of your faith community as truths, while the teachings of another community—Christianity if you are a Muslim, Islam if you are a Christian—as stories, even as fanciful stories that stretch the imagination! “Why does that make sense to them?” we ask as we consider a “truth” of another faith, unaware of how our own beliefs can challenge credulity.

In fact, the popular press uses the word “myth” to signify lies, as in, “Five myths about losing weight.”

Family myth and the memoir writer

What does myth and its role in our lives mean for you as a memoir writer?  How does it add up when you are interviewing someone and being told accepted family myths?

Simply put: we all create stories to explain the reality of our lives and see these stories as being the truth rather than as ways perhaps of dealing with reality. The job of the memoir writer is to take information—either the info we remember or the info we obtain from an informant—and to make it intelligible, to see through the stories we tell to explain things and get to the way it probably is/was. (Caveat: you may not easily see your family myths as stories. Remember: we all naturally believe our stories to be true.)

I recently met a man who was telling me about his grown children. His son, he said with some pride, was earning a low six-figure income in NYC but it was his daughter-in-law who was the powerhouse earning in the mid-six figures.

So far the story is merely facts. Son: low six-figures; daughter-in-law: mid six-figures. There is the obvious pride but it does not seem to intrude in the narrative. Then he added, “Whenever I go visit them, I try to give them a night out by sitting with the kids. They can’t afford to hire a sitter too often.”

Excuse me? Low six-figures combined with mid-six-figures and they can’t afford to hire a sitter? Even with taxes, that ought to leave $500,000 per year! Can’t afford a sitter too often? What’s that about?

Of course, the other people—the son and the daughter-in-law—were not part of the conversation, so this is not about them. When I gently pointed the incongruence between the high earnings and the relatively low fee of a sitter (he quoted $75 per evening as a going figure), he stated, “Of course, they live in New York City and they have to be careful. It seems like they are earning a lot but everything is so expensive.” He went on to talk about their apartment with a view of a park from the balcony that ran on two sides of the building. (Doesn’t sound low-rent to me.)

Family myths in this man’s story?

Well, the conversation went on and need not be repeated here. What struck me about the exchange was the meta-text of the story, the family myth, the man had created around this family that was clearly high income—even for NYC (my son lived in NYC for years without anywhere near a mid-six-figure income and he seemed to be leading a high-quality life).

If I were writing this story, this is how I might handle it. On the one hand, the man was very proud of the achievements of his kids and their mates, perhaps feeling that the attention he and his wife had given to their children’s education had resulted in success. (Mild inquiry revealed this to be so.) But, on the other hand, and this is the point of memoir sleuthing, there was some part of him that seemed embarrassed by both the high income and by the fact that, as he said at one point, “they borrow to pay their kids school tuition and then pay it back with her year-end bonus.” (“I’d think that they’d have savings with that sort of income,” I said, not very sympathetically.) He talked about the high cost of a nanny but added the two could not afford not to be both working so a nanny was necessary. (There was no reconciliation between the “high cost of a nanny” required because they were working and the option many couples have opted for that might entail moving out of their apartment with a balcony that ran on two sides. Surely there are jobs in NYC for couples who choose to raise their kids themselves.)

So, in this story, which is really not about the two younger people (who were never there to share their mythic version) but about the father, there is a discrepancy. I can only guess why—which is not the same thing as knowing, but as a memoir writer I would guess and then investigate the probability of my guesses being accurate. Was the father uncomfortable with the high level of income and the low level of savings this couple was generating? What does the story divulge about the father who was narrating this myth about one sort of life in NYC? What does his story say about his own attitude towards money, towards achievement, perhaps towards his own life?

The ever-present process of making family myths in every life

It’s not the purpose of this article to tell you my conclusions. What I want to do is alert you to the ever-present process of myth-making in every life. I hope you will not accept stories at face value but look behind them. Ask what does it say about the teller of the story that he is framing the facts in this way? When you are writing about your family, this work may change the way you think of your own history.

Remember that family myths are attempts to explain the world. They explain much about the teller’s own psychological processes.

Do you ever wonder if your memoir as it now reads is ready to go out into the world? Or, have you gone over it many times knowing it needs something but you are not able to determine what?

We can help you improve your memoir and save you a lot of spinning-your-wheels time. We have a three-hour review package (scroll to the bottom of page).  Memoir Editing Service.

2 Responses to Going Beyond Family Myths to What Really Happened