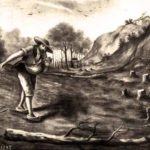 This is an excerpt from my unpublished book, Here to Stay, which is the story of my patrilineal and matrilineal seventeenth-century ancestors. For more excerpts, click here.

As was the custom in the colony, the wedding was set for a date soon after the contract signing. These were exceptional times. Winter was just three months away, and if Barthélémi and Marthe were to survive the long, cold months at the new farm in Chateau-Richer, there was much to be done. Until she was married, Marthe would remain with her host family, the Marsolets, separated from the work she needed to do. Barthélémy himself had never spent a winter on his land, and it is likely that much of his summer had been taken with constructing a small house and opening fields to cultivation. There was much left to prepare. The foodstocks needed to provide for two. Did he have enough wood to heat the cabin through the winter? His wood was necessarily green as he had not begun to cut it until that summer and so it would not warm the cabin as well. The farm animals could spend the summer outside but they would soon require a shelter. Co-habitation which would ease doing all of this work would only come with marriage. Marriage in New France needed to happen soon—and dit usually did.

September 22 fell on a Tuesday, a good as any day for a wedding. Father Thomas Morel, the missionary who was assigned to the Cote de Beaupré, completed their union at the chapel of Chateau Richer[1]. One wonders what feelings Marthe, whose abjuration of Calvinism was only two months old, brought to this ceremony. Did some part of her wish for a more familiar Protestant rite?

The two who hardly knew each other were now married for life. On the skills, the aptitudes, and the attitudes of the one depended the survival, and ultimately success or failure, of the other.

After the wedding mass, it was customary for the newly-weds who had no parents in New France to bring their guests back to their own home. That Tuesday in September, the leaves turning red and yellow, one imagines the guests walking from Notre Dame de la Visitation to the land next to the Sault aux Puces where stood the house Barthélémy had built. The house was small, and the guests most likely gathered in the open, the neighbor women serving food they shared with this couple who had so little. Soon the guests were feasting, as they gazed down from the yard of the farm to the Saint-Lawrence flowing easterly. The Ile d’Orléans spread before them to the south, the island where just nine years earlier the Iroquois had effected their daring morning raid to wipe out the Hurons.

Wedding parties were welcome breaks, and they often included every colonist in the area. Among the guests that day were the notary Pierre Duquet, Gilles Enard and Marie Debure, a normande who had sailed with Marthe from France on the Marie-Thérèse and who was soon to marry Gilles. Other guests who we can presume were in attendance were Etienne de Lessart one of Barthélémy’s witnesses at the marriage contract. His neighbors to the west Jean Plante and his wife, Françoise Boucher, and those to the east, Zacharie Cloutier, fils, and his wife, Madeleine Emard. Perhaps Nicolas Marsolet and the bourguignon Denis Derome and Jean Gervaise who had been witnesses to the contract signing.

As the air cooled, some of the celebrants left for the evening milking and perhaps to assure the animals were all safe. When they returned, one imagines a bonfire would have been lit. Someone began playing music, and men and women danced into the night on the soil of the yard, dancing the dances they had known in France, thinking perhaps of the people they had left behind, of the mothers and fathers and the siblings who were not with them to share this day of a marriage in New France, mothers and fathers and the siblings they would never see again.

[1] Construction on the church dedicated to Notre Dame de la Visitation had been begun in 1658 and was not to be completed until twenty years later. It was not officially a parish church as a parish had not yet been canonically established, but it functioned as one.