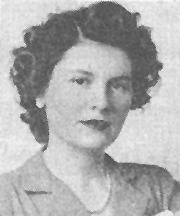 We left Lewiston and our wedding guests to travel to Albert’s base in Syracuse, New York, at 1:30. Since it was still summer and the sun was out late, we saw much beautiful country as we rolled though Massachusetts and New York. When we arrived in Syracuse, it was dark. We did not have reservations for the night, so we went to the Yates Hotel downtown not far from the station. The Yates was a big hotel, and they did have a room available for us. (I don’t remember if Albert had to leave me temporarily that night  to go report to the base.) We stayed at the Yates for one week. Then, we found a three-room, furnished apartment which was on the same floor as that of two older women. We had an icebox instead of a refrigerator[1], and it was in the hallway. I had brought some of the sheets and towels with me that I had bought for my trousseau to go into the convent. Albert would tease me when I put the sheets on the bed. He’d say we were lying on the “draps de soeurs[2].” All the sheets were white, and they needed ironing—not like sheets today that are permanently pressed and look good without all the extra work.

Since Albert was at the military base all day, I decided to find a job. Doing so was easy as there was a war going on, and there weren’t enough workers. I was hired at a General Electric plant making transistors. It was good for me to get out and do something. Every morning, I took the bus to the GE plant[3], and Albert took another to get to the Army Air Force base[4] which was north of the city. He was home with me every night.

An interesting memory I have from that time was working next to an older black woman on the assembly line. Her name was Claire. I had never known a black person in Lewiston although I had seen some, so Claire was the first one I ever talked to. She was a pleasant woman, and we got along fine although we did not become friends as I was not there long enough. The name Claire was one that I knew from home, and I thought, “If I ever have a girl, I’ll call her Claire.”

After about five weeks, we learned that Albert was not on limited service as we had believed and that he was going to be deployed overseas. One evening, he told me he was scheduled to go to Washington State[5] for training and then he would be sent overseas. It was not a happy time for us as it meant a long separation.

Since I was already pregnant, we decided that I would stay in Syracuse until Albert had to leave for Washington State and then I would go home to my parents’. Without Albert there, there was no reason to stay in Syracuse as neither of us had relatives or friends there. We were both very sad to be leaving one another so soon. Albert would not be able to share in this pregnancy. He would most likely miss his first child’s birth. As it was, I would be having this baby all by myself. It was possible that he could be killed, and then I would be raising a child alone. Had we known he would be deployed, we would have waited to get married. Having a baby by yourself is not easy so it was fortunate my parents would be able to help me.

Albert was not permitted to go back to Lewiston with me and so he arranged for his brother Leonard who was nineteen to come to pick me up[6]. Leonard arrived with his mother in the 1941 Buick the Ledouxs had bought on my 21st birthday. So, in mid-October, after only six weeks of married life, Albert and I said goodbye to each other and, without him, I returned to Lewiston and to the room I had shared with my sisters Gertrude and Thérèse. I decided that I would continue to work as long as I could and, when I went down to Benoit’s Clothing Store, I got my job back. I wasn’t there long because the Hill Mill had gotten large government contracts to manufacture cloth for parachutes and were hiring with good wages. I went over to the Hill Mill one day to see if they might need me, and I got hired as an inspector of cotton cloth on the second shift. I worked along with a number of other inspectors and our job was to examine each piece that was manufactured to make sure it had no defects. A bad cloth would have made a dangerous parachute for the men needing to land in a war zone[7].

In those days, there were no easy ways to communicate with people who were at a distance. Albert and I wrote to each other but the letters took a long time, it seemed to me, to arrive. I looked forward to receiving those letters from Albert, but he could not share with me some of the most important news—like where he was going to be assigned next. In fact, he himself didn’t know. The military would not tell the men where they were going. If information about where there would be reinforcements reached the enemy, this might have been dangerous for our guys. So that fall, I did not know where he would be assigned next. He also had to be careful about everything he wrote in case the letter should ever fall in the wrong hands.

My pregnancy was going all right, but I missed sharing it with Albert. This was our first child, and I would have been fun to have him there with me, but that wasn’t going to happen. Dr. Desaulniers[8] kept telling me that everything about my pregnancy was all right so I wasn’t worried on that account.

I was glad to be back in Lewiston but, in the back of my mind, I wondered if Albert would be safe. Would he come back home and help me raise this baby or would I be on my own, a widow?

[1] Just a few years later, people had switched to refrigerators, but in 1944, iceboxes were still everywhere. After the war, prices dropped quickly, and people could now afford to have a refrigerator in their kitchens

[4] From Wikipedia: Authorized on January 1, 1942, the 3,500-acre base had three 5,500 foot runways. The first military personnel arrived on the airfield on 16 August 1942. Syracuse Army Air Base was intended to be a First Army Air Force all-purpose station, but it became a personnel activation station instead and provided first phase training for recruits. Beginning in 1943, the First Concentration Command, later known as the Air Technical Service Command, used the base to assemble and test B-24 Liberator aircraft.

[5] DL: I believe that he went to Moses Lake Army Air Base in Central Washington State. The base now serves as Grant County Airport. From Wikipedia: the airfield was activated on November 24, 1942 as a temporary World War II training center. Moses Lake AAB was a sub-base of Spokane Air Technical Service Command, headquartered at Spokane Army Airfield.

[7] (Since this was war-related work, the people at Benoit’s did not express any anger with me for leaving. Perhaps they were afraid of being called unpatriotic.

[8] DL: A Canadian, Dr. Georges Desaulniers was a graduate of McGill Medical School.

Memoir From an Abuse Survivor Joy Willows
Childhood Memories: The Price of Happiness

2 Responses to The First Months of My Marriage