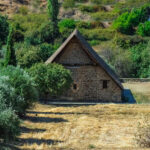 The “daughters of the king” were introduced to prospective husbands at the Ursuline convent in the Upper Town of Québec. Before the appointed calling hours, men, shy and not so shy, began to gather outside the convent, thinking perhaps of one particular woman or other who had caught their eye at Mass. These pioneers were looking for strong women who would be helpmates rather than for beauty. Soon the convent door opened and the men were ushered into a large parloir that had been set aside. In the room, sitting where they could see everything, were likely to be both nuns and the chaperone, Madame Bourdon.

Most of the girls had been furnished a dowry by the king, and it usually included an outfit for them to marry in. On these afternoons, it is possible that they wore these, to present themselves in their best aspect, when they were meeting the men. The men however had been in New France for years. New France was a place where money to buy European clothes was hard to come by—if the clothing was available at all, and so many came to meet prospective brides wearing pants and shirts made of skins after the fashion of Amerindians and their feet were shod in moccasins which they called “Indian shoes.” What a sight men must have presented to these filles du roi who had been in France only months earlier. And what a contrast these men provided with the more elegant government officials, assigned to New France for only a short time, officials who had the wherewithal to dress as French gentlemen with wigs and silk!

No wigs or silks however for bachelors, like my ancestor Barthélémy Verreault, who had paddled up the Saint Lawrence to Québec on a warm summer day. How could there have been anything of the elegant about them? Barthélémy was building a house in Chateau-Richer, on the land he had purchased near the Sault aux Puces, and he is likely to have had animals to care for. He would have spent all week working on the land and on his house. That morning, he would have fed and watered his animals and, assured that everything was safe, perhaps stopping by his easterly neighbors, Jacques Cauchon, sieur de la Mothe, and his wife Barbe-Dephine Letardif, to ask them to keep an eye on his place, he would have set out on the Saint Lawrence—there being as yet no road all the way[1] to Quebec, to the Ursuline convent.

This is an excerpt from Here to Stay, a book-length account of Denis’s 17 century ancestors

[1] “Roads” often consisted of footpaths men and women trod to go from one farmhouse to another. There was no bridge crossing the Saint Charles River, separating the Beaupré Coast from the settlement of Québec. A road linking Québec and Montréal would not be realized until the 1730s.