During these years, Aunt Blanche Lessard lived with us. When she was in her early twenties, while we were still on Shawmut Street, she had come down as a Canadian immigrant, looking for employment and had moved with us to Jefferson Street. In Lewiston, she apprenticed as a hairdresser with a Canadian woman and eventually was able to earn her living as a hairdresser.

When she was not working, she helped my mother with household tasks. But, what I remember most about my aunt was that she gave me a lot of attention. I didn’t get the attention I needed from my busy parents but I got it from Ma Tante Blanche. She’d do my hair up in curlers and she’d fuss over me. My Aunt Blanche had a boyfriend, and we thought she would marry and remain in Lewiston, if not in our house, at least close by.

My father had a brother, Roméo, who was also a Canadian immigrant and stayed with us during the same time Aunt Blanche did. He did not stay long however before going back to Thetford. My mother’s brother, Pitou Lessard, and his wife, Antoinette, had an apartment down in Little Canada where they were raising a family—by this time, they had Wilfred and Gloria—so I had some first cousins in town on the Lessard side.
Upstairs from us lived three women—the Ouellettes—who had never married. They would take my brother Reggie to their apartment to “spoil him for a while!” (They took the others of us, too, but I remember how they were most fond of Reggie.) Often, the ladies fetched him in the morning and did not return him until bedtime. This lightened the load for my mother, and she must have looked forward to these breaks. Not that she spent this time resting—there was always a baby clinging to her as she prepared a meal before my father arrived for his short lunch break or as she did a laundry at a series of tubs in the basement (which was how the wash was done in those days before washing machines).

It was perhaps in 1928 or 1929 that I made my first communion in the basement church of Saint Peter’s. By then, the lower church had been in use for more than twenty years, and it must have seemed to parishioners that the upper church would never be finished, but little by little, it was being constructed.

My mother bought me a white dress and veil from the Mademoiselles Janelle who owned a shop on Lisbon Street. They were single women who made their living as business people. In those days, sales were much more personal. The sales clerk, as in this case, was often an owner who was invested in customer satisfaction. I regret I do not have a photo of this first communion dress. Photos were then a more challenging project than they are today and were usually taken in studios. Most likely, my family could not afford a studio session and so there are no pictures to commemorate the event. Nor was there a reception.

Not long afterwards, I was confirmed. It was a tradition to choose a couple from the community to serve as godparents to the entire group, even though each of us had individual godparents. That year, Dr. Morin served as godfather for the boys, and his wife was godmother for the girls. Again there was no reception and no pictures.

I don’t remember when my aunt Blanche left, but I must have been about seven or eight. The relationship with her boyfriend had not worked out, and she wanted to go back home to Thetford. She had learned to be a hairdresser, but like my mother, her time in the US had not facilitated her acquiring any English beyond a few words. We lived totally in a French-speaking environment. Reading the newspapers, listening to the radio, shopping downtown could all be done in French. 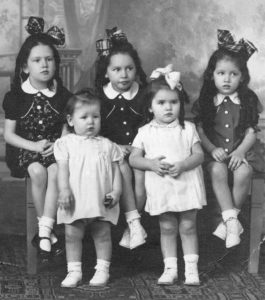 On the day my aunt left, I had school. We said our goodbyes in the morning and, sometime that day, she took the train back to Thetford and put an end to her days as a Canadian immigrant.. When I got home, she was not there. I had known she would be gone but I still cried because I understood at last what “I’ll be gone when you get back” meant.

For a long time, in my large family where I was the “big girl,” I was so lonely for Aunt Blanche and for the attention she had showered on me. As long as she lived (she died in 1984), she was always a special aunt to me. Whenever I went to Thetford as an adult, I wanted to stay at her house.

2 Responses to My Aunt Blanche, My Favorite Canadian Immigrant