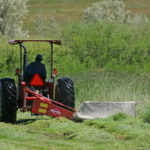 Gunnar was mowing his field. This was odd. He never mowed his field. He was making ever-tightening circles around the knobby acre, the sweet grass and raggedy weeds falling in neat windrows behind him. He rolled over the bumps and dodged the knot of trees in the middle and the outhouse at one end while perched atop a full-size tractor that, despite its bulk, failed to dwarf him. It was a nice grassy field, shimmering with seed in early August, rimmed with pines and oaks on three sides and a low-slung ancient stone wall on the fourth along the road, across the street from my house.

“I wouldn’t call the police if I were you.”

I turned to find my neighbor from up the road standing next to me in my front yard. He was grinning conspiratorially.

I was new to the area, “from away” as they say, still trying to learn the ropes to living on this narrow, pock-marked road on the outskirts of nowhere in the middle of Maine.

“The party,” I said vaguely. “Yes, I’ve heard about it. The motorcycle party.”

“It’s noisy, but they quiet down early. Just a bunch of people on motorcycles.” My neighbor was giving me this look that told me I might be tempted to call the police, but I should just wait things out.

I looked across at Gunnar on the tractor. He was waving to us, a broad, friendly smile peeking out from his bearded face. He was taller than he was wide, but not by much. He had a job somewhere up in the foothills, a mechanic of some sort. He was 40 or so, and he’d grown up in the house next to the field. He looked like the stereotypical teddy bear of a big, bearded man. The neighbor was exaggerating about the party, I felt certain.

We’d lived on this little road long enough to know that the neighbors got to do whatever they wanted with their land. Up the road, one house was surrounded by a professionally landscaped yard; across the street from it, the house there had been left to sink into the ground in favor of a rusted trailer. It was a neighborhood in transition, from a few farms to smaller tracts of land on which people from away built houses. We had bought one of the old farmhouses when the farmer called it quits, so we were in the in-between. We gained a lot of respect when we left our Christmas wreath hanging until it was the proper shade of brown, and even more when we drew the curtains during the cold months but left them open during the hot. One had to find the balancing point between practicality and neighborliness, privacy and exhibitionism.

We bit our tongues when people from away complained about Gunnar’s scraggly yard. We said nothing when some newer people starting a campaign to have the bulges and crooks taken out of the road. We knew the old-timers referred to the lumpy asphalt as speed bumps, keeping the brave drivers who attempted the road under the speed limit. We knew we had to take the neighborhood as it was. And that meant not calling the police when Gunnar had his party.

—
This is Part I of a four part memoir shared by Chris Madsen. For more of Chris’ work please go to www.whostolemybrain.com

Pudgy: A Childhood Memoir
There Goes The Neighborhood, Part 2