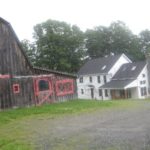 Gunnar owned the field and the house across the street. At one time, the house must have been a trim little cape. But now it rolled a bit, as if it was caught in a perpetual wave, and the white paint was badly flaked and faded.

The house gave way to a series of sheds that ended at the entrance to a monstrous barn three stories high. Inside were Gunnar’s prized possessions: his Harley motorcycle and his vintage automobiles. Gunnar loved motorcycles. As a child with his first bicycle, he’d liberated his mother’s brand new metal vacuum cleaner tubes to serve as tailpipes on his two-wheeler, an undertaking that ended in a tangle of twisted metal, both pipes and bike beyond repair.

The property was at the juncture of three towns, so Gunnar had a smorgasbord of town services to choose from. He used the garbage pickup from one town, sent his 10-year-old daughter to the better schools in another, and voted in the third. He lived there quietly with his current wife and daughter, as well as a medley of older children from his previous marriages and liaisons, and his wife’s. At any given time, there would be three or eight or twelve people living there. You could only tell by the number of big old American cars scattered in the dooryard.

The back part of the field and the woods behind it were also home to big old cars, ones that no longer worked, that had retired to stately disrepair after years on the road and then a year or two in the winter demolition derby.

We had already witnessed the demolition derby over the snowy weekend between Christmas and New Year’s. We figured the upcoming motorcycle party couldn’t top that. The demolition derby started with the arrival of large trucks bearing strange cargo, battered cars ripe enough for destruction. Starting shortly after noon on Saturday and continuing well into the darkness, these cars raced around the frozen field, sending up huge splashes of mud-riddled snow, slewing around the circle as fast as they were able. Few cars had shock absorbers; fewer had doors, and from time to time a driver would hit a lump of ice or frozen ground and pop from his car to land prostrate in the snow. The demolition part wasn’t intentional. It happened when one car lost control and smashed another, or, more frequently, smashed itself. Bumpers, tail pipes, and assorted lights littered the field.

But Gunnar was environmentally cautious: he insisted all cars empty their antifreeze before joining the contest. Everyone obeyed Gunnar. He was their leader.

The derby resumed on Sunday, and we were at our places at an upstairs window to watch. We were rooting for a lime-green and pink sedan. There was something about the carefree, door-free, windshield-free spirit of the car that captivated us, and we gasped every time another car part abandoned it. The muffler landed under the oak tree, the bumper clashed with another bumper and lost. Yet it gamely struggled on. Finally, it was the last car running, the winner triumphantly revving its engine as it took a victory lap, the pilot and co-pilot hanging out the sides of the car waving their beers at the crowd.

In the months since the demolition derby, people had dropped hints about the motorcycle party, held the first weekend in August, but we hadn’t really paid attention. What could top a snowy demolition derby, good to the last drop?