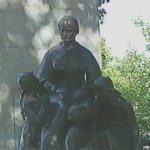 a monument to our ancestors, the filles du roi

This excerpt is drawn from Here to Stay, a book-length account of Denis’ seventeenth-century ancestors.

In the summer of 1663, ships, plying down the Saint Lawrence to dock at Québec, brought letters to the governor from King Louis about change that was to come to Canada. Hearing the news, many settlers were hopeful that, at last, Canada might receive the support it desperately required. Among the first changes were incentives to increase the population which, in 1663, numbered only 3,035. Given the small number of people, every death—whether due to natural causes, childbirth or war—was discouraging to the colonists. Every death meant one person less in New France to clear the fields, conserve the harvest, mind the family.

Realizing the role of women in increasing the population from within (vs. migration from without), Louis XIV encouraged female wards of the state to migrate to Canada by offering them incentives. Known as the daughters of the king, these filles du roi were mostly orphan girls or at least girls and women without a family to support and care for them.  In France, the future for these filles du roi was grim. Canada, with its surplus of men, held the promise of a husband, a home, and a family—and the king would not only pay the woman’s transportation to Canada, he would provide each of the wards with a dowry. But not every single woman who wanted to come would be allowed to.

“Before letting them on board, there has to be one of their relatives who assures us they have always been upstanding,” wrote Pierre Boucher, a sub-governor of Trois-Rivières.

Men Penalized for Not Marrying

To be sure that Canadian men responded to this royal initiative with appropriate marriage proposals, a tax was levied on all men over the age of 20 who were not married. In addition, obstinate men could lose their right to hunt, fish, and trap, but there was an out. Men who did not want to marry just yet took to the woods. Years later, these coureurs de bois would emerge and they might marry one of these filles du roi—and then they might not.

In all, about 900 to 1,100 filles du roi came to Canada. There is no person of Franco-North American descent who does not count one of them among his or her ancestors. Among the filles du roi was Marthe Quittel, the first of my female ancestors in my mother’s line in North America. She landed in New France, single, impoverished, and 27, in July of 1665. I write about her in another post.

If you want to write genealogical accounts and need help, give Denis a call or e-mail him. He offer writing coaching that can address whatever level you are at.

There Goes The Neighborhood, Part 2
Filles du Roi / Daughters of the King: Marthe Quittel Comes for a Husband