When I was ten, I ran away. I packed everything that was important into my sturdy cardboard suitcase. I left a note on the kitchen table warning my parents not to look for me at the high-tension wires, those metal electrical towers that marked the back border of our property and which were in fact my destination. I never made it to the high-tension wires. I got as far as the start of the path through the woods where I found an accommodating rhododendron bush under which I could hide.

From here, I could see anyone headed for the path. The path led from our backyard through what we called the woods, though it was really just a severely overgrown lot, to the high-tension wires. I knew everything about both the woods and the high-tension wires from days and years of playing and exploration. I knew where to find day lilies and where to find cattails. I knew where wood violets grew beneath old elm trees, and I knew just where to jump to avoid stepping in holes on the uneven path. The woods tended to become downright swampy during the spring. One time when I was walking through them with my mother, trying to keep up with her, I stepped into a nasty patch of mud that sucked the boot right off my foot. I left it there and walked the rest of the way in one boot and one sock. My mother was not pleased.

The rhododendron bush was large and squat. I sat there waiting for someone to come looking for me. No one came.

This presented a problem. Did I stay hunched under the rhododendron and watch the night darken the sky? My food supply was modest, and the bathroom facilities not to my liking. Surely someone would look for me after dark. Or did I accept the inevitable now, before hunger overtook me completely, and return to the house? I opted for a gracious re-entry: I would stalk into the house and announce that I had forgotten something. Surely someone would beg me to stay. 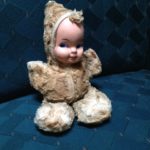 And so I walked the 50 yards back to the house. I flung open the back door as dramatically as I could, and announced to the kitchen that I had forgotten something.Dinner was cooking unattended. The TV set echoed the news in the living room. I marched to my room and closed the door. I put my suitcase on the bed and opened it. Had I really forgotten anything? There was my silver dollar, my locked safe disguised as a book, and my favorite doll, Pudgy. Nope. Looked pretty complete to me.

I hesitated, deciding what I was going to do. I could just close the suitcase, flounce into the living room and leave by the front door. Surely someone would notice. Or I could put Pudgy back in his place of honor on my pillow. Pudgy’s round celluloid face was framed by a head of pale blue plush that ended in a little point, as if he had on a hooded sweatshirt. His body was a big hollow ball of plush with a squeaker inside. His arms and legs were nothing more than overstuffed stumps, but they were long enough that he could sit up properly. I named him Pudgy as soon as I got him, a present from my Aunt Frederikke, whom we all called Aunt Rik, like reek. My sister got an identical doll, and decided to name hers Pudgy also. Since I was four at the time (she was two), I was not flattered by her imitation but rather annoyed that she was copying me. I’m fairly certain she didn’t even know what pudgy meant.

“Christy,” my mother called. “Time to set the table.”

I went back to the kitchen. There on the table was my run away note. I stuffed it in my pocket. No one had noticed.

Pudgy had a place of great importance in my hierarchy of stuffed creatures. He bumped the unnamed teddy bear from his position of honor in bed next to me. He spent his days surveying everything from my pillow. He became my confidant, my totem, my touchstone. Squeeze his belly for a reassuring squeal. Twirl his one lock of bright yellow hair. Stroke his celluloid cheeks. Pudgy had it all. No more than eight inches tall, Pudgy was a giant in my eyes. He noticed everything.

Dinner smelled good. And it was getting dark. I might as well stay, I figured. I could always leave tomorrow. I went back to my room to unpack. Pudgy sank gratefully onto my pillow, and gave me that knowing look of his. He didn’t question why we were back. But he knew I had my unread note in my pocket. He knew we might have to leave again.

My sister moved on to Chatty Cathy and then Barbie, but I remained true to Pudgy, even during the troll craze of the ’60s. I was a one-doll kind of girl. I don’t know what became of my sister’s Pudgy. I still have mine. His once-blue plush is now a threadbare gray, but his eyes are still bright. His tiny lock of yellow yarn hair is limp with age, but his lips are a nicely weathered pink. He sits on my desk. He notices everything.

Please share your lifestories with us. Mail them to: [email protected]

Life During The War
There Goes the Neighborhood, Part 1