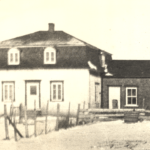 DL: The following is an excerpt of my grandmother My grandmother Marie Bilodeau Ledoux from a family booklet I created around the year 2000 and gave to family members.

When Thomas Bilodeau walked out of the mansard-roofed Empire-style farmhouse he had built several years earlier at the end of le rang Saint-Noël, he could turn his head to the left and see the spire of the parish church which dominated the countryside.

He was thirty-four the year Marie was born. Five years earlier, he had married Aurélie Gagné on July 1, 1879, in the next town, Saint-Bernard. She was hardly more than a girl, in her late teens.1 By 1884, he and his wife already had three daughters—Angéline, Corrine, and Ernestine, who had red hair like her Mémère Gagné (born Rose Dubois). His wife, Aurélie, was 24 the year she gave birth to their fourth child on the Bilodeau farm in Saint-Narcisse-de-Lotbinière in Dorchester County, Québec.

The land that Thomas farmed was flat as is much of Dorchester County, as flat as the American Midwest. As Thomas looked over his fields, he could see the flat land stretch northward to the Saint Lawrence River, the fleuve that gave sustenance to the French-Canadian nation and still holds a special place in the hearts of its people.

Getting ready for the baby

By May 15, the day Marie was born, the ground was finally dry enough after the prolonged, muddy snow-melt to initiate the summer’s work in the fields—the work always began with plowing. The early kitchen garden, too, le potager, could be sown by then: peas, spinach, lettuce, radishes. Already in mid-May, the asparagus and the rhubarb were well into their season, and perhaps that day, when Marie was coming into the world, her father, looking to savor a noonday treat, had mixed rhubarb with maple syrup he had gathered in March and early April and processed right there on their land.

At 34, Thomas Bilodeau was a farmer like his father, surely, and most of the men before him, a man with a wife and three—soon to be four—children. They all depended on his ability to wrest a living from the land. It is time for a boy to be born in the Bilodeau family, he must have thought, knowing he would need a boy to help him in the barns and fields. The demands of his growing family would eventually outpace his ability to provide and what would he do without a boy? Just as a woman could not make a success of living on a farm without the support of a man nor a man live there without the support of a woman, he and Aurélie knew they needed the work of both boys and girls, in an age when farm and house chores were largely gender assigned, to make a success of farm life. In their society, one strictly segregated by gender, the arrival of another girl would present limitations about how the family could support itself in the years to come.

Be that as it may, there was a birth to attend to. Perhaps the red-haired Rose Dubois Gagné, in her fifties, had come to the farm at the end of the rang to be with her daughter. Perhaps a sage-femme, a midwife, had come too? Because birthing was women’s work and because farm chores called for immediate attention in this short, busy season, Thomas would have left the house, exiting through the back which faced north, and, stopping a moment as he espied the spire of the church of Saint- Narcisse, to his left, across the flat landscape, perhaps he uttered a prayer for his wife and for the women who were attending her. Then he cut across to the barn. As on most farms, all the more in Québec where the season is brief, there was never enough time to do all the work. Perhaps that day he did not harness the horses for plowing because he did not want to be far from his wife.

Had the three girls been sent away that day to play with cousins in Saint-Bernard (just three or four miles away) where his sister Zoé was living with her husband, Damase Tanguay, or had he himself brought the girls over to a neighbor’s?

That day, May 15, 1884, another girl child was born. They called her Marie. Although her name departed from the “ine” sound established with the names of her three older sisters, Angéline, Corrine, and Ernestine, it honored her father’s sister, Marie Vaillancourt, who perhaps still lived in Saint-Bernard where she had been married in 1877. Marie’s parents were to return to the “ine” sound with Augustine and Albertine who were to be born next. There would also be a Bernadette and, at last, boys—Albert, Thomas, Emile and Nazaire—would be born into this farming family, abundantly in a row as if to make up for a previous neglect.

Then, well into the next decade, the 1890s, the last two children would again be girls: Rosa and Rosilia.

Marie would live in this house for 12 years until poverty, induced by colonization at the hands of another people, forced the family to leave.

Do you have story about your grandmother’s (or grandfather’s) birth or early life? Post it below in the comments below. Let’s keep the memoir conversation going!

To accelerate your learning-to-write curve, why not take advantage of all the resources in the Memoir Start-Up Package.

How Many Memoir Types Are There?
My First Morning Away