In Franco-American New England, marching drill teams were popular. These teams were made up of girls who played instruments and marched in formation. Rhéa Ledoux was a team captain and she got to march in front of the other girls. The various drill teams would prepare elaborate sequences which they performed in parades—often in competition for a prize. Some of the local teams were very good.

I join a marching drill team. 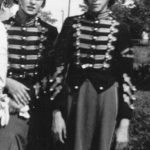 Our uniforms were made of wool and were vary warm in the summer.

The St-Jean-Baptiste parade was always a focal point as Canadians celebrated their patron saint on June 24. There were always big parades, and participants prepared for months in advance. My friend Rita Métayer was in a drill team, and she was always asking me about joining it. I was working at jobs that kept me somewhat isolated—as did the housework and childcare—and joining a fanfare that would give me evenings in the company of a group of girls my age began to seem like it might be fun.
Her cousin, Rhéa Ledoux, who lived next to me, was captain of Rita’s drill team. She had become good enough to start a team that was composed mostly of girls from Holy Family parish. Her team met in a third-floor room at the Institut Jacques Cartier on Lisbon Street. Between the two of them, they convinced me to join Rhéa’s drill team. Soon, I was spending an evening, or if it was close to competition time, two evenings a week practicing with Rita and other girls under Rhéa’s direction.
Besides marching in parades, we also did other things. In May 1938, we performed in a play that was part of a number of short skits presented at a meeting of the Union St-Jean-Baptiste. The USJB was a sponsor of the drill team and so by performing we were giving something back to them, expressing our gratitude. I enjoyed being in plays. In July of that year, we were part of a parade in New Auburn. There was a prize for the best fanfare, and we won first place! Rhéa received a special commendation for her achievement in training us.

We travel to Fall River, Massachusetts, to compete.

We girls in the marching drill team wore woolen uniforms and hats that resembled top hats. These hats had a long feather coming up the front. The outfits were fine for spring and fall marching, but in the summer, we were very hot wearing these uniforms! It was probably in 1938, too, that we went to Fall River on a bus to march for a huge competition.90 Although I was about 18, my parents were very worried about me going away and staying in a hotel, and they made a big story about it. The fact that we would be many girls together and would easily be able to take care of one another did not calm them, but they allowed me go.

She Loves Her, Yeah, Yeah, Yeah
More Than One Memoir: a Mosaic of Self