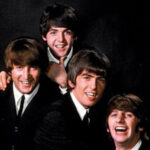 Who were these Beatles, anyway?

Everyone was screaming. Everyone, even Betsy, sitting next to me. Betsy was a charter member of our secret club that was the envy of nearly every girl in our class at Washington School who wasn’t a member and wanted desperately to know what the secret three-letter club name meant.

Now Betsy was screaming her brains out. I stared at her in disbelief. But as I looked around Park Theater, the only movie theater in the Caldwells, the very green end-of-the-line little towns on the long boulevard that stretches from the big, bad city of Newark 15 miles away, I realized that the entire theater was packed with girls. I didn’t see a boy anywhere. All I saw were girls. And every single one of them was screaming.

For some reason, I couldn’t open my mouth. Except to gawk.

Not only could I not scream, I couldn’t figure out why everyone else was screaming.

I had seen the Beatles on T.V. back in February. I’d watched them on our black-and-white television with my sister and grandmother, lying on the floor, propped up on one elbow, moderately interested in these moderately good-looking four guys singing moderately good songs moderately well while a bunch of girls in the audience screamed ridiculously at them, just as they had at the airport a few days earlier.

“Promise me you will never like them,” said my grandmother.

“Me too,” I said. My sister would stray first. She would bring home one of the 45s, I don’t remember which one, and we would listen to it covertly in the living room when we were home alone. This was just one of the things we did when we were home alone. We had a pink record holder especially for 45s, the record format used for popular songs. It had a drawing of teenage girls dancing on the front.

We also used to practice our tap dancing on the flagstone entryway at the front door. Our parents would yell bloody murder whenever they caught us doing this, so we learned to wait until they were out. We also learned to wait until they left to listen to the forbidden “Vatican Rag” by Tom Lehrer on the gigantic console hi-fi in the living room, although we usually couldn’t get past the first verse, because my sister found it so sacrilegious. Speaking of which, our favorite alone-time sacrilegious activity was re-enacting the Mass in our bedroom, complete with Eucharist consisting of flattened bread (shaped by a liqueur glass) and juice. We fought over who got to be the altar boy, because the altar boy had the important job of moving the mysterious book that the priest needed to use from one side of the altar to the other. Moving the book was the coveted job; all else was secondary. But most of these secret activities had lost their luster now that we were full-grown preteens, or at least actually almost.

My sister also was at the movie theater that day, upstairs in the balcony. She claimed she was there with her friend Linda just so they could laugh at all the older kids as they screamed, but I could see her in the balcony, and she was screaming too, and so was Linda. I also could see MaryAnn, who used to babysit for us, sitting in the back row of the balcony, and she was screaming too, even though she loved Elvis, had already graduated from high school, and was a grown-up.

In fact, everywhere I looked I saw someone I knew. Someone from school, or from the swim club, or from church. My best friend Julie was here. She of course was part of our secret club. And she was screaming her head off.

She was sitting with Katie, who of course was screaming. Katie wasn’t part of our club, but really wanted to be. I don’t know why she wasn’t. We had never even considered adding Katie to our privileged number.

Why wasn’t I at the movies with Julie? She was my best friend.

The maneuverings of barely-teenage girls (we were almost 13) as they stumble down the path of friendship are indeed wrapped in layers of gauze. Lots of layers. Thick layers, to serve as padding to protect the girls.

Julie was my best friend, had been since third grade when our mothers started to teach together and we started to walk to school together. That’s when we started our secret club, too. At first it was just Julie, my sister, and me, and our play centered on imitating the three cartoon chipmunks (Alvin, Theodore, and Simon), but I did not care for this game, because I was stuck always being Simon, because he wore glasses and I wore glasses sometimes. I was glad when we added a fourth to our group, and then a fifth and finally a sixth. Our secret club was then complete.

The club was named E.A.F., and if you think I’ll tell you what that means, forget it. At our 40th high school reunion, another member and I cackled over how we’d kept the secret all these years, and we’re not about to spill the beans now. I will tell you that at one point we made lovely dishes out of brook “seaweed” and at another point considered becoming ballpoint pen repair people. They have quite interesting inner workings.

But Julie was my best friend, and we were inseparable. Our houses were about a quarter-mile apart, a distance we could cover so fast the screen door hadn’t slammed shut yet. Her house offered a big front yard with lots of “nothing” going on, an interesting lower level with the possibility of a stage, an overhanging balcony, a brook out back (seaweed!), and a VW camper. My house was inherently boring. All we had to offer was neighbors: we could rustle up four suitable kids from surrounding houses when club members weren’t available.

But even the promise of available kid-fodder for our imaginative play wasn’t powerful enough to pull her to my side anymore. Now these four owl-eyed nasally boys from England appeared to wheel her in, even when she couldn’t hear a word they were saying, as long as she had Katie next to her and a lot of overdone makeup on her face. Did her mother know where she was?

Katie and I used to walk home together, because our houses were pretty close, but last year she had started to run ahead of me, not letting me catch up, purposefully avoiding me.

That was in sixth grade, when Julie started to act different, too. That was when everything started to change. Julie and I worked for days painting a spinet piano box into a two-person Wonder Bread package costume to wear to school on Halloween. When the big day came, she refused to wear it with me and instead wore a bluebird costume. So much for the friendship being in full feather. Miserable, I tried to get my sister to wear the box with me, but she refused—normal sister stuff—so I wore it by myself, which was not easy.

Our little club was disintegrating. Julie and another member, Allie, were losing interest. But there was no final adjournment, no adjournment sine die. They didn’t much care about exploring the woods or camping out in the VW camper. They wanted to hang out with Katie and other girls and giggle about boys and look at the heavy silver bracelet with his name on it that Robert had given to Donna.

Julie and Katie and Allie weren’t drifting away. They were pulling away, deliberately and willfully. It was mean. It was hurtful. It was probably unconscious on their part. I hope. I didn’t understand why, and neither did they. I hope.

I couldn’t even voice a prayer that I would understand someday what I couldn’t understand now, that I would realize why, before they would, why I couldn’t scream about these four gangly boys, or figure out why everyone else was screaming about them, or why everyone here begged their mothers to let them wear makeup and stockings and heels to school, or why they had all become beings unlike me: I was a lesbian.

You have a coming of age story? Please send it to us for consideration for these blog pages.

Chris Madsen lives in Vermont. A graduate of Bates College, she was a journalist for a number of years before striking out on her own as a freelance writer. Today, she is working on a novel as well as numerous nonfiction projects.
View all posts by Christine Terp Madsen →
My Father Loved to Tell a Story
I Join a Marching Drill Team