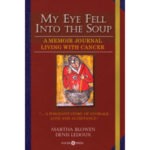 Martha Blowen, my partner in life and in work, died on August 18, 2008, from metastasized breast cancer. The following is from collated excerpts of journals we both kept at the time.  (Before she passed away, she gave me permission to share her entries.)

The memoir is called My Eye Fell Into the Soup, after a dream in which one of her eyes fell into a cauldron. She later interpreted this to mean she was not paying attention to her health. (This is written about elsewhere.) As with most people, I suppose, the cancer diagnosis was a shock. The italicized excerpts are hers: the others, mine.

The first excerpt, “A Cancer Diagnosis”, is available here, and the second, “Will We Find Cancer There, Too?” here.

I start chemotherapy on Monday: taxol and avastin. I will lose my hair. I will be wearing kerchiefs for the world to see that I have cancer. I hate that public aspect of cancer. I hate having a public persona, having everyone know. 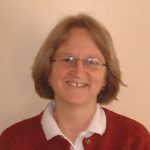 The brain scan was the first good news I have had. No brain cancer! I was vulnerable and weepy in the doctor’s office. I found it hard to hold on to the conversation, to what the Dr. E was telling me. I was glad D was there. Between us, we might be able to recreate what she actually said.

In 1992, when I had my first occurrence of breast cancer, the chemo entered my veins with a chilling effect. It was cold, and it felt like a sick thing entering me. Not something that would make me better. I have to say that I am dreading chemo. Will it be different this time?

Cancer is such an assault. Anything of interest in my life is on hold. Cancer is what my life is about now—for how long?

Zoé [our daughter] is coming this evening. I am very anxious to see her.

Having a Plan in Place

Since meeting with Dr. Erickson yesterday, Martha and I have been reassured by “the plan.” We had been adrift for a week and now we are at a fixed point: next week—that is, Monday— Martha begins chemotherapy. Somehow we feel better. How can it not be better from this point on? But Martha, even though she is not even on chemo yet, is not having an easy time. The painkillers are upsetting her stomach.

I am nauseous already—having a very hard time with food. Two nights in a row, I threw up. The antibiotic is a player in this as are the painkillers. They have to be taken with food which is difficult at bedtime. I have been eating only rice cream.

Lissa [a friend of our daughter’s] sent flowers—so sweet of her. Wasn’t it only yesterday that she and Zoé were little girls playing in the woods in back of the house and now they are both grown-up women? I am holding back from writing: “and I have cancer.” I remember from the last time how cancer invaded everything, became the prism through which I viewed life.

Pauline [a friend of Martha’s] and Maggie [another friend of Zoé’s] came by for a visit with some spanakopita snacks and a CD of Hildegarde of Bingen. How sweet of them. Maggie, too, like Lissa, was a little girl with Zoé, and Pauline and I were young mothers.

How time has passed.

Martha is sleeping a lot. She is on drugs that induce sleep and so she is unconscious for long periods of time. Perhaps that is good.

I go to the gym again. My food consumption is not right however to support much exercising, and I seem to plod along from exercise to exercise. Even with the plodding, some part of me enjoyed the session. Towards the time when I was finishing, a security guard came in and turned the few of us there out because there was no monitor on duty.

I catch sight of myself in the large mirrors that line the gym walls. I am clearly thinner from the lack of appetite of the last nine days. 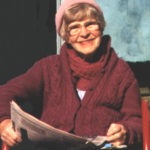 As I get more and more sick, I have to think through how I will be able to take care of my mother who is, after all, dependent on me and, at the same time, take care of myself.

I threw up Pauline’s delicious spanakopeta.

Will I get my life back?

Showing up for writing—regularly
Will We Find Cancer There, Too?