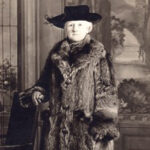 My parents must have had little hope of ever putting aside enough money for a down payment to buy a house of their own. We were still in the three-bedroom apartment on Shawmut Street when Gertrude was born on March 5, 1925. She was thirteen-and-a-half months younger than Marcel. I was three and a half at the time, and Robert was two. My parents, who had been married only four and half years, now had a house full of kids, but two thirds of their family was still to come!

Around this time, an aunt of my father’s aunts approached my parents about a partnership. Émilia Dulac Parent—a sister of the Joseph Dulac who had founded the plumbing company where my father worked all his life and of my grandmother Zélire Dulac Verreault[1] had buried two husbands from whom she had apparently inherited some money. While she had once lived in Lewiston, she now lived in Detroit with a son. I don’t remember the details, but she used to come back to Lewiston for extended stays. At one point, she and my father worked out an agreement whereby she would take a second mortgage on an apartment building on Jefferson Street that was then newly-constructed, and my parents would eventually pay her back and thus own the building outright. My parents considered it a great opportunity to get their own place, and they eagerly took her up on her offer. For the twice-widowed Aunt Émilia, the deal was probably a combination of genuinely wanting to help her nephew and of investing her extra money.

We moved into the large apartment on the first floor—the first people to live in it. My parents bought a dining room set with a buffet. My mother was very proud of how it looked. There was a living room in the front, as well as a large kitchen in the back of the apartment. The sink was made of black slate and linoleum covered the countertop. For a while, I had my own bedroom—something I would not have again for the rest of my growing up. In all the rooms, the floors were hardwood. There was a large yard and, in the far back, there was a shed. My parents were comfortable on Jefferson Street. I think my mother especially appreciated that the children could go out in the yard and come back into the house so easily.

When Aunt Émilia was in town, she both lived with us and with relatives by marriage in another building she owned. She came once with her granddaughter whose name was Dorothée. She had been born in Detroit and did not speak French and I spoke no English. While I played with her, we did not get to communicate much. It was on Jefferson Street that I first remember playing with other children. Across the street, there was a girl named Jeannine Dionne, and next door to us, one named Juliette Lepage.

In the evenings, my father loved to tell us stories. He would sit three or four of us on his lap and ask us what we wanted to hear about. Perhaps un petit rien tout nu[2]? Not knowing what that was, we would nod our heads oui. “Do you want your petit rien tout nu to be red or blue?” Then, he’d make up a story. I loved sitting on his lap as he told us these stories.

Réginald came along on December 3, 1926, when Gert was twenty-one months old. He was followed eleven months later by Normand on November 17, 1927. When these new babies grew big enough to sit on my father’s lap, I lost my place to them. While sitting on a chair near him was made to sound special, it clearly did not provide the same sense of comfort and security as snuggling against him had, and I didn’t like it, but I was told I was “a big girl.” Being the oldest in a family that was always getting larger, I was often made to be the big girl before I was ready.

At night, if any of us complained about not wanting to go to bed, my father would say, “That’s not a problem. You don’t have to go to bed. We’ll get you a pole and you can sleep perched[3] like a chicken.”

In the fall before Normand was born, I started first grade at St. Pierre School on Bates Street. While the school was run by the Dominican nuns whom I had seen at church, it was staffed by young lay women. I liked school and learned well. My parents must have arranged for me to walk from our house at 63 Jefferson Street to school with other children who were older than I. The year after I started at St. Pierre, Robert went to public kindergarten at the Coburn School. I don’t know why my parents sent him to a school where the teachers didn’t speak French. The next year, he joined me at St. Pierre.

That fall, on October 10, 1927, right before Normand was born, my grandmother Zélire Dulac Verreault, who was only 56, died from kidney problems in Thetford (Québec). I don’t remember if my father went up to the funeral. We didn’t have a car, but people did travel by train then[4]. I was only six when my grandmother Verreault died, and, since I had never seen her except possibly at my baptism, I didn’t know her and her death did not sadden me. What saddened me was, because we lived so far away from any of my grandparents, I did not have the opportunity to be a granddaughter. Because of that, I always envied those children whose grandparents lived in Lewiston or Auburn.

My grandfather Eugène Verreault came down to visit us once on Jefferson Street after Grandmère[5] died. I suppose he came down on the train. He was alone, of course, and what I remember about him was that he had big hands. My father had big hands, but his father’s were bigger still. I had never seen such large hands. He had worked in the mines much of his life and had become a foreman on the third shift. Perhaps it was at this time that he told a story about how my grandmère was alone one night when there was a large thunderstorm raging overhead. She went to get holy water that she apparently kept with other bottles. She took out a bottle and began sprinkling it around the house to protect it from a lightening strike. In the morning when my grandfather came home from work, he found blue spots all over the walls and furniture. Grandmère had sprinkled bluing water[6] and not holy water!

From Jefferson Street, my father could walk to work at Dulac Plumbing and Heating on Lisbon Street, but I remember that someone picked him up in a truck in the morning and brought him back at night. The business had both a service end and a store front. My father worked only on the service end, going out to install new plumbing or to do repairs in homes, businesses and institutions. When he needed transportation, he used company trucks. He would drive himself home for lunch, smelling of metal and solder, and his large hands were always stained dark from grease and dirt. The grease and dirt found its way beneath his nails where it was hard to clean completely.

[4] You could also hire someone who had a car to drive you, and I would do this ten years later when I went to Thetford to visit my Lessard grandparents.

[5] We did not use the terms Mémère and Pépère.

[6] Used when I was young to make whites whiter.

Lucille Ledoux raised six children and worked for many years in clothing stores. When her children were pre-teen, she made sure they had time to read, and dream, and play. She was a resident of d’Youville Manor in Lewiston until her passing in 2015. She never thought she would write a book, but she raised her son well and he helped her with We Were Not Spoiled.
View all posts by Lucille Ledoux →
The Kirkus Review on Peggy Kennedy’s Book
Web Memoir Affiliate Program Accepting Applications

2 Responses to We Move to a New Home