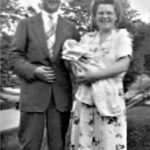 DL—This is the third excerpt from A Sugary Frosting, the memoir of Martha Blowen, my lifemate and business partner who died in 2008 of metastatic intraductal breast cancer.

The previous posts (first, second) covered Martha’s premature birth and her family’s recent move to Worcester, Massachusetts, where her father had taken on to serve as minister of Congregational church there and her grandparents’ stay.

As it turned out, my mother’s choice—albeit unconscious—of my grandparents over me proved to be a wrong one.

By coming to Worcester, my father was closer physically to his half-siblings who, if I remember right, lived in Massachusetts and Connecticut. he was not close to his brothers and his one sister on the Yoemans side. Age and education isolated him emotionally from them. They worked in mills and in the trades, and they must have seen that, as a minister, he landed a job that provided more ease and income. That supposition is perhaps why Enos and Emily, my grandparents, had been handed over to him and my mother.

Sometime during the while after I was brought home, unbeknownst to my parents, my grandfather Blowen had called his Yoemans step-sons (my father was the only mutual child of my grandparents) to complain that Arthur and Ladora were not taking care of their mother, Emily. As a result of this call—or calls, not many weeks after my parents brought me home from Worcester General, two of my half-uncles came unannounced to the parsonage to take my grandmother and grandfather away.

My parents were shocked. It felt like a betrayal on my grandfather’s part, and a betrayal on the part of the Yoemans brothers who had not spoken to my father, their half-brother, about what the situation might possibly really be, presuming the worst to be true. They came into the parsonage, made their announcement of the decision to remove my grandparents which was a fait accompli that they were not willing to discuss, packed my grandparents up and drove away with them.

My father and my mother had not yet established themselves in the Hadwen Park Congregational Church, and I can only imagine that they felt it to be a compromise of their position within this untested community to have two brothers “have to” show up to take their parents away. Always aware of the minister’s standing and reputation, Arthur and Ladora must have cringed at the thought of a church member, a stranger really, making a value judgment on the care they had administered to these two old people. I’m sure that my father was kind and thoughtful, and even more so can I state that my mother must have given her in-laws as much of a first-class care as her knowledge and ability would have enabled her to do. My mother, nurturing by nature, was a woman who knew how to serve, and she had a strong sense of how to make an environment comfortable and nurturing for others.

Grandma Blowen died six weeks later. My parents went to the funeral, but it was a frosty occasion. Relations with my grandfather were to remain distant, and I saw him only a handful of times in my life before he died in 1961. I was to grow up hardly knowing my Yeomans relatives.

Since my mother was an only child, we Blowen children were left with a very small family indeed and this contributed to making us into a unit that was turned inward on itself. In the years we lived together, we were somehow unable to discern the example of other families, to learn from them how to be a better family. The opposite was held to be true: it was other families that were supposed to learn from us.

family stories, working with a ghostwriter