In February of 1944, Albert was given a seventeen-day furlough and, during that time, we became engaged to marry. We did not set a date, but we talked of a wedding that summer. At the time, he had left the program in Venice, Florida, and was at Daniel Field[1] in Augusta, Georgia. The Army Air Force sent a lot of their planes there to be repaired or maintained. It was a good place for Albert since he was training to service aircraft. He would not be going to the front lines, we presumed, but would service airplanes in safe places. Daniel Field was one such place where he might spend the rest of his military service. The Army Air Force called this “limited service.” Men on limited service stayed in the US. 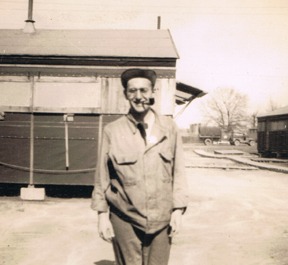 My brother Marcel had been discharged from the army because he had had a ruptured appendix. He had spent three or four months away—some of it in basic training and some of it in the hotel on the beach in Miami the army had housed soldiers in. After he was discharged, he came home and worked as a salesman and was going out with Jeannette Lagacé. Before Albert and I could set our own date, they announced their wedding plans for July 4. We were disappointed because we didn’t want to crowd them out by getting married, too, around the same time. So, we put off choosing a date for ourselves. Our wedding would have to take place later in the season now.

By the summer, Albert had left Daniel Field and was stationed in Syracuse, New York. He was still on what they called limited service, which meant service in the US only. He was able to get a furlough for the weekend of the Fourth, and he and I attended Marcel and Jeannette’s wedding together. He wore his uniform for the day and, except for that reminder of the war going on, it might have been a normal day when two young people who were going to marry were attending a relative’s wedding. He told me he had another furlough scheduled at Labor Day, but we did not think at that time of getting married in September because, in spite of being classified as being on limited service, he had a feeling that he might get sent overseas. If he went overseas, who knows what might happen to him and so we thought it would be better to wait until he got out of the service—certainly until he returned from overseas.

I was almost 23 and Albert was 22 so we could wait to get married. We had been going out for about three years so we were ready to make the next move, but we just continued to wait for the right moment. We did not want to marry and risk starting a family during a war. We could not help but be aware that Lucille Dulac’s husband George Bergeron was missing. He was in a prisoner-of-war camp although I don’t think she—or we—knew he was alive and in captivity then.

[1] Daniel Field was a commercial airport that was taken over by the military in 1941 and used as an Army airbase. The facilities became a repair and replacement depot for Third Air Force aircraft. Albert was training to service aircraft.

Do you have WWII stories from your grandparents/parents about choosing to marry? Please share it with us in the comments section below.

Guest Blogger: How to Blog Your Memoir in 10 Simple Steps
After a Book is Published: We Were Not Spoiled.