DL—The following excerpt is from We Were Not Spoiled, the Franco-American Memoir of Lucille Verreault Ledoux as told to Denis Ledoux.

Moving to Howe Street also meant that I lost my friends on Jefferson Street. I could still get together with Juliette and Jeannine at school but they were no longer just outside for me to play with. 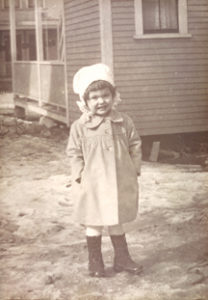 Soon after we moved into our new home, it was April Fool’s Day. April Fool’s was a new thing for us, something we had learned in school. It fell on a Wednesday that year, and my father had come home for lunch as he often did. While we usually brought our lunch to school, we too would sometimes come home to eat. (The poor lady on the second floor could tell it was mid-day by the pounding on the stairs!) My mother had something ready for us when we arrived and then we would have to walk back in time for classes and my father would return to Dulac’s Plumbing and Heating or to the work site of the day.

I can’t remember if I had planned a joke for April Fool’s, or if it just happened spontaneously. I went to the bathroom and, feeling very clever, when I came out, I had a very straight face and I said to my father, “The toilet is overflowing. There’s water all over the floor.” My father jumped up from his meal and rushed to the bathroom to do what he could to avoid a total disaster of a third floor toilet overflowing on the poor lady downstairs. Of course, there was no overflow.

While he was in the bathroom, I must have told the kids I was playing an April Fool’s joke because, when he got back, the kids were all laughing. My father did not find the joke funny—even after I explained what April Fool’s was. The thing was he was always playing jokes on us and I had thought he would find it funny to be bested. He did not punish me but he told me never to play a joke again.

That was his introduction to April Fool’s Day. You might say he didn’t like this American custom.

Writing Exercise: Write about a humorous reaction that you or someone in your family had to a holiday. Post the story, if short, as a comment below or, if long, to be published as a blog post.