She’s more than a name on the genealogy chart, although I don’t know what she looked like or the sound of her voice, the color of her hair. Her heroic character shows in census records. Her scarred and paint daubed blanket chest sits in a place of honor in my home. My great grandmother, Annie J. Reynolds Hill, was born in the north west corner of Rhode Island in 1861, the sixth child of immigrant Irish parents.

Annie was a year old when her parents moved their family to Davenport, Iowa, where her maternal grandparents and at least one uncle had settled. I imagine that they traveled by train in 1862 and how excited the older children were. Annie likely had no memory of that long train ride, but I hope her McTeague grandparents held out their arms to greet her and shouted a big welcome. Iowa, however, was not to be a good place for the Reynolds family.

They lived in Rogertown, an Irish enclave that no longer exists. Her uncle Patrick is listed as living there and working as a laborer, a hint of the hard, uncertain work her father must have done to support a still growing family. Her sister Bridget, child number seven, was born there in 1863. James, the oldest child, died there at the age of nine. Probably he was buried in St. Mary’s Cemetery in Davenport. That burial ground has been abandoned and those with no headstone to record their presence were likely paved over.

Ann Reynolds, Annie’s mother, was pregnant with her eighth child in 1865. The War Between the States had ended and soldiers were bivouacked near Rogertown. Three Union soldiers passing by her house insulted Ann, not a rare thing for poor Irish to hear. But Ann reported their rudeness to their commander. Nothing happened. Until they passed by again.

Ann’s husband, Michael, angry and drunk, accosted the three with an axe. The soldiers were, of course, armed and one of them shot Michael. As the newspaper says, “He died in the street in the presence of his grieving wife and children.” Annie, aged four, saw this. Her father, too, was buried in St. Mary’s Cemetery and has no memorial to mark his existence.

After baby Sarah was born, Ann Reynolds returned with her children to Rhode Island. She remarried, but her new husband seems not to have nurtured the Reynolds children. Census records show that five of them worked in the textile mill in North Providence. 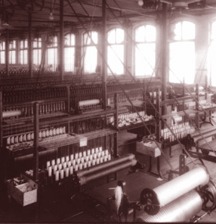 By the time Annie was nineteen, she was living with three of her sisters; Eliza at twenty was the head of the household. Sarah, the youngest, who had started work as a sweeper in the mill at nine years old, was still at the mill at fifteen.

Annie married in 1884 and bore two children, the first in 1893. So she was childless for the first nine years of marriage. Her daughter, Susan, married in a hurry and after her son was born, divorced. In a Catholic family this was yet another disappointment. Annie’s son, my grandfather, married and had a son, only to die of tuberculosis at the age of twenty eight. He died in Annie’s house. Again, imagination tells me that she helped nurse him and was with him when he died. Her daughter remarried and Annie lived in that house until her death in 1926, after many years as a widow.

Karen Douglass moved to Colorado after many years in Maine, and many before that all over the country. Her interests are writing, family, horses, dogs, genealogy, and reading. (The order is random and changes day to day!) She has been writing all her life, mostly poetry, but some fiction and creative non-fiction, as well. She taught writing at Georgia Southern and LSU-Shreveport. She is a member of Boulder Writers’ Workshop, Lighthouse Writers Workshop, and Colorado Independent Publishers Association. View her web site at: http://kvdbooks.com
View all posts by Karen Douglass →

My father-in-law’s 100th birthday
Guest Blogger: Three Elements Necessary to Blog A Memoir (Or Any Memoir)