The following memoir excerpt was written by Chris Madsen of Olympia, Washington.

I never got used to that first splash of chilly water. It came from a natural spring concealed behind a stockade fence, so clean and pure that we all thought Mr. Trecartin should bottle it. Instead, he let the spring fill the swimming pool his family had owned and operated since 1927. It was called Elm-Tre, a pun on the graceful trees that ringed the grounds, and his own last name.

We first joined the pool when I was 8 years old. That summer, Mr. Trecartin taught my younger sister and me to swim, in group lessons at the shallow end. We crept our way down the three broad steps into the increasingly icy water and huddled miserably until it was our turn to work with him. I think it was the first time I noticed underarm hair, as he bent over in the water next to me, demonstrating the front crawl. Obediently, I dragged my arms through the water, resisting the force I generated. I flutter-kicked holding on to the edge of the pool, my arms braced stiffly in front of me. At last I was deemed skilled enough to put them together into a crawl that was really a limp across the pool. 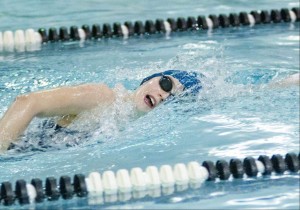 Mr. Trecartin immediately drafted me for the swim team. I reported for swim practice every weekday morning, plunging into that pool before the sun had a chance to even glance at it. I learned to swim 25 yards quite well, breathing properly on both sides, and soon was turning in respectable times and winning ribbons. The record board carried my name next to several events. I had the official team swimsuit, the official team swim cap.

At the end of the summer, the swim team held an awards ceremony on the patio. Mr. Trecartin stood behind the snack bar, using the counter as his trophy display. The trophies were dazzling beyond belief: pale pillars building to a central platform, on which stood a gleaming gold statue of a swimmer in the proper racing dive position. I coveted them.

I knew that the little kids like me didn’t get trophies. They were reserved for the kids who swam the longer events, the 50-yard and 100-yard races and relays. But I had hopes. After all, my name was on the record board. But I was careful not to give myself away. I knew Vicky was hoping for one, too, and I smugly thought I had a better shot than she did. If she knew how much I wanted one, and I didn’t get one, I would never hear the end of it. Every time Mr. Trecartin started to talk about a girl swimmer, I listened closely. He liked to tease out the description of the swimmer, keep people guessing who had won the trophy.

“This next girl,” he started, immediately catching my attention, “set several records this year.” Hey, that fit!

“And this is only her first year of swimming for Elm-Tre—” So did that!

“And she swam with hay fever—” Me! Me! He was talking about me!

“How about some applause for Gail Watson!”

Not me. Gail, 15 years old, impossibly tall with impossibly straight hair, glided up to the counter and shyly accepted her trophy.

But the next summer, Debbie appeared. I knew her from school. We didn’t get along. I think it had to do with the only time she came to my birthday party and gave me the game Chutes and Ladders. My sister looked at it and announced that we already had it. I think Debbie never forgave me the embarrassment.

Debbie was as good a swimmer as I was. She took over the first swimming position from me. She swam anchor on the relay. I was relegated to leadoff, an important position, but not the premier spot. Occasionally I would beat her in the 25-yard freestyle, but she always beat me in the backstroke. At the end of the summer, Mr. Trecartin gave us both trophies.

I swam competitively until I was 17. I won more trophies, more ribbons, came close to winning a big regional championship race once. I was recruited for a very competitive winter team. Vicky never beat me. Debbie and I kept beating each other.

My sister took each of her three children and dunked them into the pool when they were babies. I took my son and dunked him. Our parents weren’t members anymore, but Mr. Trecartin let us in anyway. He understood. This pool, this water, where we spent all of our summers needed to be passed down to our children.

When Mr. Trecartin retired, he tried to interest his children in keeping the pool going, but they went in other directions. He tried to sell it to the town as a community pool, but the town didn’t have the money. Eventually, he sold the land to a developer, who plowed it under.

The box of trophies is in my attic somewhere. Every time we move, my family teases me about them, tries to get me to junk them. They’re cracked, and some of the golden swimmers are more of a dull yellow. I’m not even sure they’re really all mine;  my sister won a bunch of trophies, too. But I lug the box from one house to the next. I can feel that icy water when I touch them.

Starting Out On My Life
The Howe Street Apartment