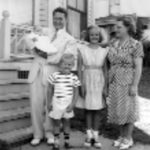 Life in a parsonage for my family was a 1950’s middle-class existence. It is what I believe my father was striving for when he worked those years in Enfield, CT, after high school and before Bates College, those years at Bates working at the telephone switchboard at Central Maine General Hospital, serving as kitchen and dining room help at President Clifton Daggett Gray’s house in exchange for board and a room on the third floor.

Neither my father nor my mother were materialistic people and they did not see their educations, I believe, as passports to more “things.” For them, middle-class life seemed to have been about respectability and standing. While they had met in Greek class, neither of them could be classified as intellectuals. (Years after college, my mother would refer to a child-psychology class for references which seemed sacrosanct to her as if the intervening years had not generated an incredible amount of research findings in behavior and motivation and other areas of psychology. Since she did not read psychology, she was not aware of this.)

My parents would have described themselves as doers, and the Hadwen Park Congregational Church as their sphere of doing. They would sometimes speak of a classmate of Daddy’s who had left the active ministry to be a UCC administrator as having somehow chosen the lesser and, even more disparagingly, they spoke of someone who was doing pastoral ministry as having been unable to take on the challenges of working with a congregation.

During those years, my mother, wearing white gloves, went shopping in the large stores downtown. If we were with my father who might have come with us as chauffeur, there would follow lunch or, at least, refreshments in a restaurant. My father loved to eat out, to enjoy the social occasion of being in public. My mother might say as we tagged along, “Isn’t Daddy wonderful.” In my little petticoats and maryjanes, I was sure I had the most wonderful daddy in the world.

A time with more leisure

One day, I helped Daddy clean the birdbath. This seemed like an important project to my young self. As I reflect on this now, my father had much free time in his days—perhaps everyone in the 1950s had more time than we did later. As minister, my father made his own schedule and, except for Sunday services and meetings, had almost complete freedom in how to use his time. Cleaning the bird bath in mid-afternoon when other men—his Yeomans half-brothers—were working in a textile mill or an insurance agency or in a garage was something he could let himself indulge in. No one would question him the use of his time. He was the minister and he could easily—as was true—detail his weekly work to include visiting a church member in the evening or over the weekend or having done some other work of charity on off hours. Perhaps this compensated for his mid-day leisure time.

My mother was also very involved in church activities, and as the saying had it of the minister and his wife, the church got two people for the price of one. She did not chafe at teaching Sunday school or spearheading a number of committees or of hosting church functions at the house. (Was it at one of these functions that I showed off my rosebud petticoat?) During this time and later, she lived Mrs. Curtis’ admonition that, for a woman, being a minister’s wife was a higher calling that being a minister herself. This higher calling had its menial side. Mom’s hands were always ink-stained from running masters of church bulletins through mimeograph machines. I remember this vividly.

On a wintry day, I came home from the park where either John Mark or Emily must have taken me to find my mother washing the floor. My mother was as likely to be washing the floor to have it clean in the event a church deacon came in unexpectedly as to have it clean because cleanliness was important to her. What others thought about her and her family was very important to my mother. She was not a social climber or a user of other people. I think she simply derived parts of her identity not from herself but from others. She would decide to do things not for themselves but to assure that others thought well of her husband and of her family.

It was while we were in Worcester that I had chicken pox. During the days that I was laid up, my mother spent hours sitting by my bedside. Sometimes she would sing and other times she might tell me a story. But, what I remember most was waking up and seeing her near me working on something, her attention riveted. Perhaps she was darning a sock or perhaps she working on a religious program, but she was there. I felt secure with her so near to me even if I was sometimes feverish and miserable. I sensed nothing bad could happen if my mother was so close.

My mother also had a manner of making things fun for children. One rainy miserable day when I had wanted to go out for a picnic but could not because of the weather, my mother organized a picnic in my bedroom. It was fun to eat on the floor and break the rules of convention. This appealed to my independence. I was just a little girl and was easily amused by this novelty.

My fifth birthday party, not long before we left Worcester, was attended by friends and by my entire kindergarten class. Gordie and the Latolas must have been there. My mother was always good at organizing such activities—I don’t know whether it was that she genuinely enjoyed pulling them off or whether it was because she saw a birthday party as supporting the minister’s standing in the community. She always had a heightened sense of Daddy’s “standing,” and it often shaped her responses. She seemed to believe that the entire world was Congregationalist and everyone was acutely aware of the minister of the Congregational Church. I’m not sure the parents of the Catholic children in my kindergarten class (Worcester had a very large percentage, for instance, of a French-speaking Catholic population) had this sense of reverence for one of the many Anglo Protestant ministers in town.

Martha Blowen, Denis Ledoux’s lifemate and business partner, died in 2008 of metastatic intraductal breast cancer.
View all posts by Martha Blowen →
71 years ago today…
What Kind of Person Does Well as a Memoir Network Affiliate?