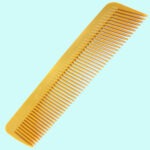 “Look at this,” my grandmother said. “Not a tooth broken.”

We kids looked at the comb. We were not impressed.

I looked again. Now I was impressed. I was 8 years old, and I had no idea how to make a comb. This one was big, maybe eight inches long, thick and creamy white. Indeed, not a tooth was broken. It looked nothing like the flimsy black plastic one my father carried in his pocket. My grandmother kept this one in the top drawer of her dresser with her small assortment of jewelry.

“When you were in school?” my sister, 6 years old, asked.

“I wasn’t in school,” Grandma said. “I had left to go to work. I had to help support my family.”

My grandmother had nine brothers and sisters. Johnny and Adele were the youngest, then my grandmother Bessie, then Flora, Eugene, Adolph, and Robert, the oldest. There also had been three brothers all named Charles after their father, all of whom died in infancy. The family lived in Newark, N.J., where my great-grandfather Charles Wolff owned a tannery with his brother. Back then, Newark bustled with business, especially breweries, tanneries, paint factories. The Port of Newark rivaled that of nearby New York City; combined the two added up the busiest shipping port in the world.

And in the midst of this, the tannery provided for my great-grandparents’ family, my great-grandfather’s brother’s family, and everyone else who worked at the tannery. No one got rich, but no one went without.

My great-grandmother Della was pregnant with Uncle Johnny. When Charles Wolff died, he didn’t have a will. There were no laws protecting widows and young children. There were no inheritance laws.

My grandfather’s family got nothing. His brother took it all.

“The only thing we got from him,” my grandmother said, “was a bag of oranges thrown onto the stoop at Christmas. He and his wife didn’t even stop the car, just honked and threw the bag onto the stoop.”

My grandmother left school in the third grade and went to work to help support her family. Her mother, with an infant and a toddler, had to stay home. Robert and Adolph and Flora and Eugene and my grandmother all left school, went to work, tried to keep the family going.

In the good years, my grandmother cut pieces of cardboard for soles in her shoes. In the lean years, she wore boxes on her feet. There was nothing to do about their lives except work.

That’s when she made the comb, working for Celluloid Company. Did she smuggle it out of the factory one day, or was she allowed to take it? Given her wild side, she probably smuggled it, probably on a dare.

Eventually, Bessie went to work for Westinghouse Company. There, she met John Meyer. At first, John was probably drawn to her because she was shorter than he was. John was 5’6″. At her tallest, Bessie was 4’11”. John was a tool and die maker. With his good steady work, good steady pay, he was to be her savior.

They married, and immediately Johnny and Adele and my great-grandmother Della moved in with them. My grandmother succeeded in saving her family. They inched back to the middle class. They bought shoes. They bought food. When the uncle’s car came round that Christmas, they were gone.

When my grandmother died, we found the comb still tucked away with her jewelry. Seeing it there, my 26-year-old mind at last understood. Not a tooth was broken.

3 Responses to Nothing Broken