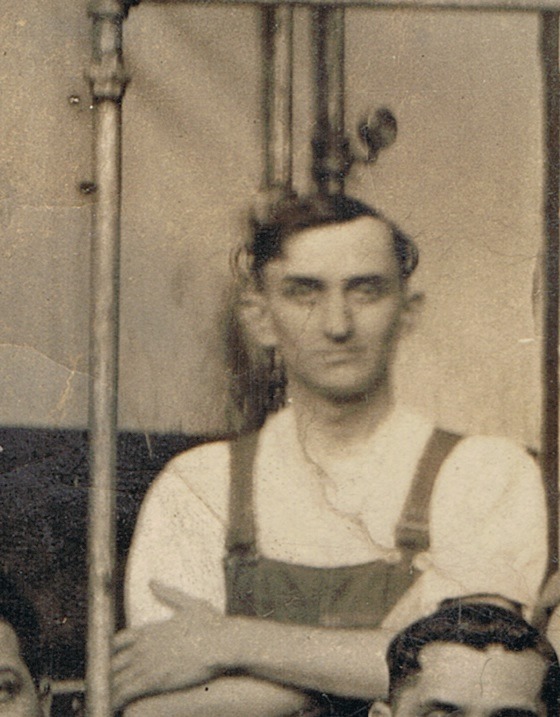 My grandfather Ledoux in the 1930s in his mill clothes

My grandfather William Ledoux would have been 125 years old today. I would like to take a moment to honor his memory.

He was born in Lachine, Québec, on February 17, 1889, the oldest of what would be a family of six children. His mother was 20 and his father 19 at the time of his birth. The family moved from Lachine, then a small town, to Montréal when he was quite young. He grew up in Montréal in an apartment on Papineau Street. Papineau is a major artery today, but in those horse-and-buggy days, it must have been quieter. Two brothers and three sisters followed him in the next 11 years.

My great-grandfather Georges was a blacksmith in those days when there was a big need for blacksmiths. He was however in the last decades of this work as soon the automobile would be coming to replace the horse.

An interesting story about my grandfather’s family was how, in those days, women from the Kahnawake Iroquois reservation on the south shore of the St Lawrence would come to Montréal where they would seek temporary jobs with the women who lived in the apartments. My great-grandmother, a housewife supported by a blacksmith husband, was by no means a wealthy woman. The Indians were even less so. They would come looking for jobs like doing laundry, washing the floor, cleaning out a room.
One day, my great-grandmother Aurélie, had a sick baby on her hands when somebody knocked at the door. My grandmother went to the door to see who it could be. It was an Indian woman seeking employment. My grandmother said, “Oh, I just can’t talk to you now. I have a sick baby. He has just had a convulsion.”

The Iroquois woman asked, “Does madame have any onions?”

My great-grandmother said, “Yes, I do.”

The stranger replied, “Madame, I know what to do for your baby.” The woman entered the apartment and she and my grandmother took some onions and cut them into little pieces and they lay them on the mattress of the bed where they then placed a sheet. They put the child on the sheet. The story has it that the child got better and never had convulsions again.

Later on, when I was a baby myself in 1947-1948, I had convulsions. My grandmother who had the story many times from her husband said to my mother, “You have got to place Denis on a bed of onions.”

My mother, being more modern than my grandmother, resisted but, after yet another convulsion, she felt rather desperate to have some remedy to my situation so she said, “Okay let’s do that.”
She and my grandmother sat down and prepared a bag of onions. They lay me on that bag of onions and that was the last time I had convulsions.

Coming Down to the US

In Fall River, my great-grandfather spent a decade as a blacksmith but, as time went on, blacksmithing became less and less of a viable occupation. decided to become a mechanic. As a blacksmith, my great-grandfather Georges had many hands-on skills and he decided to become an automobile mechanic. (Many blacksmiths became mechanics.) He had a garage which a cousin of my father told me was the last building on the old road to New Bedford. I have never seen this building but one day I will go down and check it out. My father’s cousin said it was no longer a garage, but when you look at it, you could tell that it had once been a garage.
That is how my grandfather came down to live in the US. My grandparents met on a blind date and were married in 1912. They had five children.

My grandfather died on December 23rd 1972. He was a wonderful grandfather and I feel very fortunate to have known him. I have written a memoir of his life for family.

I hope this blog post has been helpful to you to write a better memoir. It is a brief—and, I believe, high quality—assist in a facet of your writing, but there is much better I and my team can provide you. The best ways always come down to a Memoir Network professional coaching and editing your memoir. As your coach or editor, we don't give you just theory as in this blog post (beneficial to you by the way). You and your Memoir Network professional plunge deep into your story and develop it so it "comes alive" for your readers. To explore this option in a free consult, email me at [email protected] for an appointment. Want to try a launcher, do-it-yourself option? Try Write Your First Memoir Draft Program. Over the coming weeks, you will learn to write better, deeper memoir and to write more quickly and with more satisfaction. Enroll today. Another option is my classic book Turning Memories Into Memoirs / A Handbook for Writing Lifestories and my many other memoir-writing books. Join our FREE My Memoir Education membership. It's easy to register, and you'll receive tons of free materials.
View all posts by Denis Ledoux →